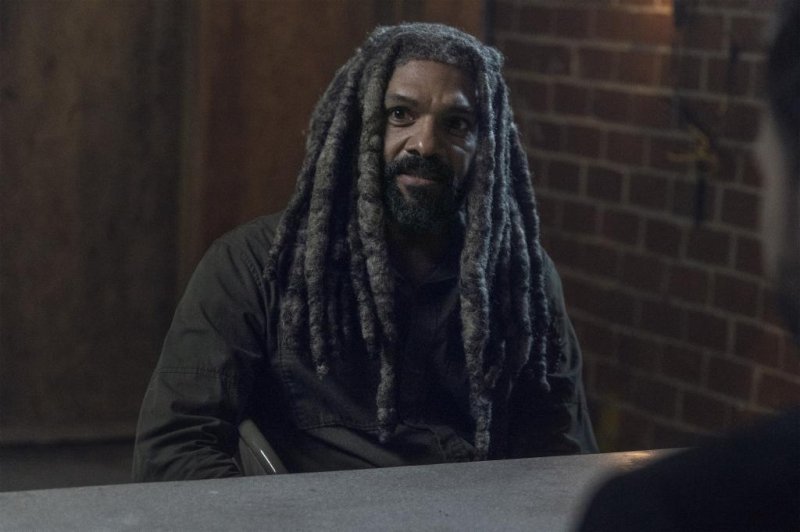 Khary Payton can now be seen in Season 11 of "The Walking Dead." Photo courtesy AMC

NEW YORK, Aug. 22 (UPI) -- Khary Payton says many actors find themselves unemployed when a job unexpectedly ends, so having an extra-long season to say goodbye to The Walking Dead hasn't been so bad by comparison.

"We get a lot of questions about mourning the end, but it is a long end. This is a nice, long victory lap," Payton, who plays Ezekiel, told UPI in a recent Zoom interview with reporters.

"We're going to be shooting well into next year," he added. "If we started crying right now, we would be spent by the time we get done. I'm still in the process of enjoying telling the story."

Based on the comic book series of the same name, the zombie-apocalypse drama kicks off its 24-episode, 11th and final season on AMC on Sunday.

The show follows a group of survivors who battle the undead and evil humans for dwindling resources and try to rebuild civilization in a community called Alexandria in the American South. Most of the previous seasons have consisted of 16 episodes.

"All that stuff that was packed into the Comic Con trailer [last month] is just the beginning of what we're shooting," said Eleanor Matsuura, who plays Yumiko.

"At the moment, we are right in the middle of it, so even though there is so much talk about it being the final season and the end, it really does feel like a long way off, and there is so much more to do."

Matsuura said she hopes the coronavirus pandemic will be under control by the time the show wraps, so the entire cast can revel in the triumph at a fan convention.

"As lovely as it is to see you all on Zoom, I want to see people again. I want us all to celebrate. I want that to be the goodbye," she said.

Although Josh McDermitt is starting to pare down the items he has in his home in Georgia, since he will likely relocate in the near future for his next gig, he doesn't think he will leave the world of The Walking Dead behind anytime soon.

"We're not letting go of our characters. We can't just turn it off that quickly," McDermitt said.

"We will still find new discoveries and growth within a character, even after the scripts stop coming out. It's going to be a weird transition, coming off a show that's been going on for so long," he added. "It's sad, but we've made some great friendships and relationships here."

McDermitt has relished Eugene's development from spineless coward to valued team player over the years.

"I didn't know where he would end up when I first came on. I was just trying to play the truth of who I thought this guy was," McDermitt said.

"He certainly gained more confidence throughout his time on the show and that in itself changes your physical behavior. ... It's been fun to push and explore where he has been able to change."

One of the aspects of the series that initially appealed to McDermitt was how the writers gave the characters somewhere to go instead of locking them in place and always having them do the same thing or react the same way.

"No one was stagnant," he noted.

Season 11 finds Eugene questioning his recent actions, which resulted in him, Ezekiel, Yumiko and Princess (Paola Lazaro) being captured.

"He might have been blinded by love, a little bit, [by] the connection he made with Stephanie on the radio," McDermitt said.

"He's not just there for her, although that is a huge component of why he is there. His community is at war, and they are falling and they need resources and they need help."

Callan McAuliffe wonders what would have happened if his character, Alden -- now redeemed and a member of the Alexandrians -- hadn't fought alongside the show's former villain, Negan, (Jeffrey Dean Morgan) and his gang, the Saviors, years ago.

"That journey, I'm sure, Alden would consider a misstep when he retraces the timeline of his life," McAuliffe said.

"It's a testament to the fact that missteps of that type can sometimes lead to very positive places," he added. "While it's interesting to think about the different things that he could have done, I like to think that it's all led to him having met these people [from Alexandria]."

Payton joked that his original community, The Kingdom, would have fared much better had he never welcomed outsiders led by Alexandria's then-leader, Rick Grimes (Andrew Lincoln).

"Ezekiel should have told Rick to 'Get the hell out. I'm doing just fine without you. Bye,'" Payton said with a laugh. "The Kingdom would have been much better off."

Matsuura recalled how her first scene on The Walking Dead was a full-scale zombie attack. It required her to be covered in sweat with no makeup on her face as she fought alongside other survivors against legions of flesh-eaters.

"It's like you're thrown in the deep end and you've all got to make it work and rely on each other," she said.

"Those experiences are hard to replicate, but they've definitely changed me, because if I can do that, I feel like I can do pretty much anything. I'll go do another job now, and I can't believe that they're putting makeup on me or getting a nice warm chair for me to sit on." 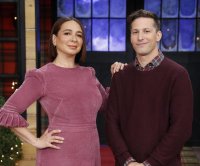 TV // 8 hours ago
Maya Rudolph, Andy Samberg stuffed selves hosting 'Baking It'
LOS ANGELES, Nov. 30 (UPI) -- "Baking It" hosts Maya Rudolph and Andy Samberg discuss the challenges of eating every confection made by contestants on the Christmas baking show, out Thursday on Peacock.

TV // 17 hours ago
'Chucky' renewed for Season 2, premiering 2022
Nov. 29 (UPI) -- Syfy and USA Networks have renewed "Chucky" for a second season ahead of the season finale on Tuesday. The series follows seven movies in the "Child's Play" killer doll series.