Aug. 4 (UPI) -- Samoa Joe was provoked by NXT Champion Karrion Kross and Dexter Lumis battled Johnny Gargano with his love for Indie Hartwell on the line on WWE NXT.

NXT general manager William Regal brought security on Wednesday in order to keep Joe and Kross separated from each other. Kross will be defending his title against Joe at NXT TakeOver 36 on Aug. 22.

Kross entered the ringside area before the main event and stood on the announcer's desk in order to provoke Joe into confronting him. The champ said it was a mistake for Joe to resign as NXT's enforcer and said he never had control over the black and yellow brand.

Joe then arrived onto the scene and brawled with the security team as he made his way to the ring. Kross got away, leaving Joe to continue to fight security in a rage.

The Samoan Submission Machine ended his assault by making one of the security guards pass out to his signature Coquina Clutch submission hold.

Lumis and Gargano competed in a Love Her or Lose Her Match. If Lumis won, he could be with his crush Hartwell, who is a part of Gargano's group The Way. Gargano and his wife Candice LeRae have spent months keeping Hartwell and Lumis away from each other and disapproving of their relationship.

The unorthodox Lumis crawled under the ring during the match with Hartwell going after him. Gargano and LeRae worked together to pull Hartwell out, who was holding hands with Lumis.

Gargano won the match after nailing the One Final Beat. Hartwell looked distraught as Gargano and LeRae tried to walk her back to the locker room area.

Hartwell disobeyed the stipulation of the match, however, and ran to the ring to be with Lumis. Hartwell jumped on Lumis and continuously kissed him as NXT went off the air.

Kai said she was responsible for getting Gonzalez out of obscurity but mentioned how Gonzalez got to challenge for the NXT Women's Championship before she did.

Kai expressed how she felt that Gonzalez didn't put enough effort into regaining the NXT Women's Tag Team Championships and said she will not be known as Gonzalez's sidekick. 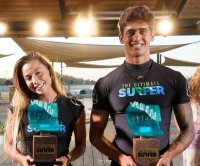 TV // 18 hours ago
Adam Cole talks 'Grand Slam,' joining AEW: 'Could not be happier'
Sept. 22 (UPI) -- Professional wrestler Adam Cole, the top performer from WWE's "NXT" brand, has taken his talents to AEW and is competing at the promotion's biggest event ever in "Grand Slam," a two-night extravaganza in New York City.
Advertisement