July 14 (UPI) -- Richard E. Grant discussed the classic costume he wore on Marvel's Loki and being a superfan of Barbra Streisand on Jimmy Kimmel Live, which was guest hosted by Arsenio Hall.

Grant starred as Classic Loki on the Disney+ series and told Hall on Tuesday that he was seeking a muscle suit for the role.

"I thought that I would look exactly like the Jack Kirby illustrations from the 1960s and costume design said that I would be in the full muscle suit like in the 60s. Then I got there and I said, 'Where's my muscle suit?' and there was none," Grant said.

Grant also mentioned how secretive Marvel is with their shows and movies and how he can't give away any spoilers. The actor compared it to starring in Star Wars: The Rise of Skywalker.

"There you have to be under Fort Knox level of security. You couldn't say anything. I wouldn't even tell my wife and daughter the name of the character that I was playing for fear that they would take my salary away or remove my kneecaps," he said about working on a Star Wars film.

Grant and Hall connected on being fans of Streisand and talked about how the actor owns a three foot tall sculpture of the singer's face that resides in his garden.

Grant says he has been a dedicated fan of Streisand's for 50 years and told her about the sculpture at a party.

"She said, 'No you are crazy.' And I said, 'I stand happily so," Grant recalled.

Tom Hiddleston says younger self would do 'back flips' over 'Simpsons' role Scarlett Johansson says Mark Ruffalo wouldn't get 'Avengers' group tattoo What to watch next: Sign up for UPI's Streaming newsletter 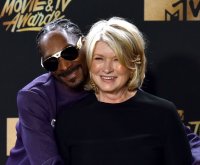