Jason Momoa says he 'creeped out' Liam Neeson on 'Kimmel'

July 9 (UPI) -- Jason Momoa described some of his early interactions with celebrities after he first moved to Los Angeles while appearing on Jimmy Kimmel Live, which was guest hosted by Anthony Anderson.

The actor, on Thursday, said he once creeped out Liam Neeson.

"I went to my first nice restaurant and I saw Liam Neeson. I fangirled out. I had never met anyone famous yet and I watched Rob Roy when I was growing up. I was really excited and just kind of stared at him," Momoa said.

"I would just smile and I creeped him out. He literally got up and he left and went a couple of tables over," he continued.

"I was checking out Melrose and I was walking up and down the street and sure enough I look in a window, me and my buddy, and we see Al Pacino. I just stopped dead in my tracks," Momoa said.

"I just spent the last half hour just walking back and forth in front of the window. To the point where he's looking at us and Al Pacino just flips us off," he continued.

Momoa appeared on The Tonight Show in June where he got into a Water War with host Jimmy Fallon.

The 41-year-old will next be starring in Season 2 of his Apple TV+ series See, which arrives on Aug. 27.

TV // 11 hours ago
Amazon 'The Boys' spinoff announces cast
Sept. 27 (UPI) -- Amazon Studios greenlit its spinoff to its series 'The Boys' on Monday and announced its cast. The spinoff will be set in a college for young superheroes. 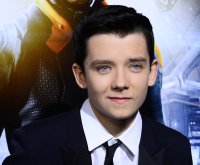