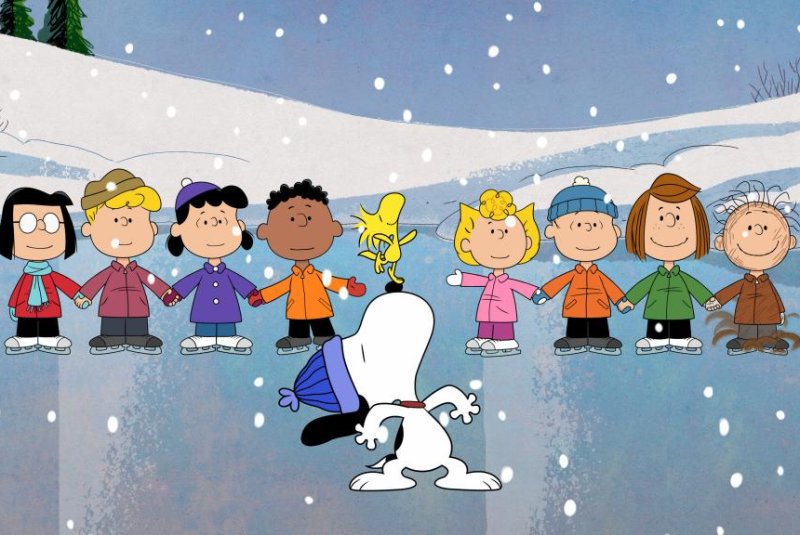 Snoopy and the "Peanuts" gang skate on the ice in new animation from "Who Are You, Charlie Brown?" Photo courtesy of Apple

Charlie Brown (left, sitting behind Linus) gets a nerve-wracking assignment in "Who Are You, Charlie Brown?" Photo courtesy of Apple

Charlie Brown (L) contemplates who he is while Linus tries to reassure him. Photo courtesy of Apple

Charlie Brown seeks Lucy's advice in "Who Are You, Charlie Brown?" Photo courtesy of Apple

LOS ANGELES, June 25 (UPI) -- The Apple TV+ documentary, Who Are You, Charlie Brown? tells the story of illustrator Charles Schulz, whose Peanuts comic strips inspired a series of animated specials and movies.

Schulz drew Peanuts from 1950 until his death of colon cancer at age 77 in 2000. The Peanuts characters were also the subject of popular animated holiday specials like A Charlie Brown Thanksgiving and It's the Great Pumpkin, Charlie Brown.

"He drew so much on himself to create these characters," Bonfiglio told UPI in a recent video interview. "We wanted to see the connections between the creator and creation."

Peanuts centers around Charlie Brown and his friends at school, home and playtime. Charlie's dog, Snoopy, often would have separate adventures with his companion, Woodstock the bird.

According to the documentary, Schulz skipped a grade in elementary school, making him feel left out by his classmates, who were a year older. By middle school, Schulz's grades were slipping, and he failed most of his eighth-grade classes.

Schulz said a lot of his Peanuts ideas came from his childhood and later from watching his own children.

In the animated sections of the documentary, Charlie Brown's teacher asks him to write about himself, which spins him into an existential crisis. As Charlie tries to figure out who he is, archival footage and new interviews show how Schulz created the Peanuts comic strip.

"We were very fortunate to have access to a lot of archival footage," Bonfiglio said. "We wanted to, as much as we could, have him tell his own story rather than have other people speak for him."

In an interview, Schulz said he dreamed of having his own comic strip since he was 6. Schulz was so interested in comic strips that an uncle called him Sparkplug, after Spark Plug the Horse comics.

Friends nicknamed Schulz Sparky, and many refer to him as Sparky in the film. After he served in World War II, Schulz sent comic strips to publications like the Saturday Evening Post. He said he found editors responded best to strips about children.

The first Peanuts was published in 1950. Schulz's widow, Jean, who is also featured in the film, said her husband never liked the title an editor chose.

"At the point that I knew him, [after] which the strip had been going on for almost 25 years, he said, 'I still hate the name. Nobody calls little kids Peanuts,'" Jean Schulz said. "It was something he hated, and he never let people forget it."

Peppermint Patty had a single mother, wore sandals and was a great pitcher. According to the documentary, Schulz was friends with tennis champion Billie Jean King and based the character partially on her. Jean Schulz said another inspiration was Schultz's cousin.

"The character isn't named after Pat, but Pat came out to California, lived in San Francisco with her partner," Jean Schulz said. "Sparky just accepted everybody. He never discussed it. Pat was just Pat and she was a strong character."

Peppermint Patty's friend Marcy would call her "sir," leading some fans to speculate that they were gay. Who Are You producer Paige Braddock, who also is chief creative officer of Schulz's company, said Schulz never confirmed Peppermint Patty was gay.

"I asked him one time why Marcy called Patty sir," Braddock said. "He said, 'I have no idea. She's a very strange little girl.' I found out nothing."

Schulz drew every Peanuts comic strip until his death. He was not, however, an animator.

"They talked all the stories through before Bill went back and made a storyboard," Jean Schulz said.

Who Are You also enlisted celebrities to discuss the impact Peanuts had on them. Drew Barrymore, Al Roker, Paul Feig and more speak about relating to the teasing Charlie endures.

Filmmaker and podcaster Kevin Smith provides additional background information on Schulz. Bonfiglio said he was surprised to find Smith such a resource.

"I asked him one question and he spoke for 45 minutes straight on Schulz and on Peanuts," Bonfiglio said. "He is an unabashedly rabid Peanuts superfan."