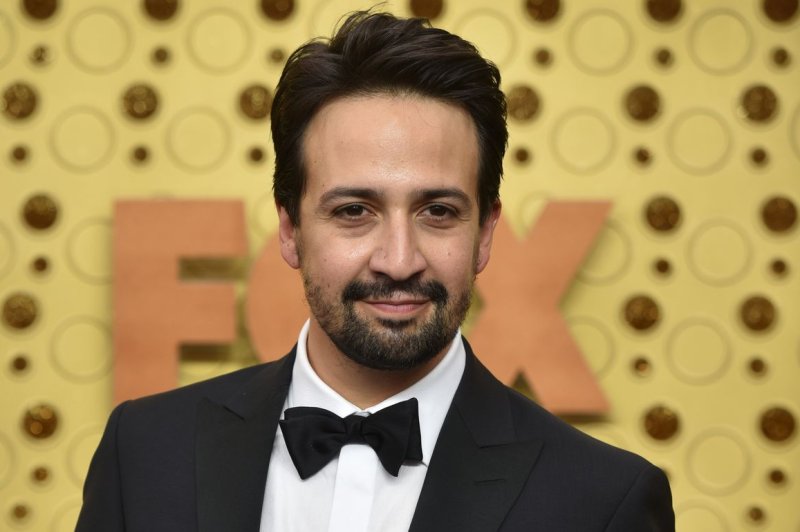 Lin Manuel Miranda performed "You'll Be Back" from "Hamilton," along with Phylicia Rashad and Kristin Chenoweth on "The Tonight Show." File Photo by Christine Chew/UPI | License Photo

June 9 (UPI) -- Lin-Manuel Miranda and Jimmy Fallon welcomed back viewers to Broadway with a star-studded performance of "You'll Be Back" from Hamilton on The Tonight Show.

The re-worked version of "You'll Be Back" was themed around Broadway plays being open for business again starting in September.

Lin-Manuel Miranda also discussed how he originally did not want to star in the upcoming film adaptation of his Broadway musical In the Heights.

The film version, from director Jon M. Chu and writer Quiara Alegría, comes to theaters and HBO Max on Thursday. Miranda originally played lead character Usnavi in his Tony-Award winning musical, with Anthony Ramos taking on the role for the film.

Miranda, in the film, portrays Piragua Guy and gets to sing with Ramos.

"I was never planning to be in it. I had my Broadway experience, which was a miraculous experience. I went from substitute teacher to Broadway composer. I will never make a leap that big again in my life and so I was very content to let Anthony Ramos and this incredible cast kind of have their own experience," Miranda said.

The actor and playwright said he was convinced by Alegría to take on the role of Piragua Guy so that the character would not be cut from the film.

"I'm so glad I was a part of it because I'm so proud of what Jon made. There's a moment where I sing with Anthony and he played my old part and I get to duet with him. I'm on a fire escape and he's a floor below me and I'm singing a new harmony and he's singing my old harmony. There's all these like full-circle moments," Miranda said.

TV // 16 hours ago
Josh mistakenly goes through porthole to 1988 in 'La Brea' Season 2
June 30 (UPI) -- SSeason 2 of the sci-fi drama "La Brea" features a new twist with Jack Martin's Josh waking up in 1988 after mistakenly falling through a portal.