Vanessa Morgan brought her infant son, River, with her to the set of the CW series "Riverdale." File Photo by Jim Ruymen/UPI | License Photo

The 29-year-old actress brought her 3-month-old son, River, with her to the set of the CW series Thursday.

Morgan gave birth to River in January and had been on the maternity leave from Riverdale since late 2020. She shared photos on Instagram of herself holding River in a baby carrier on the Pop's Diner set.

"Back to work looks a lil different these days," Morgan captioned the post.

Morgan announced her baby boy's birth in an Instagram post in February, calling the birth the "most challenging, beautiful experience" of her life.

"Words cannot describe this kind of love. We are enjoying this time home with him, being present, & giving him all the lovin in the world," she said. "Becoming parents is the most rewarding gift in the entire world."

"Early on in my pregnancy I was walking the River everyday, gave me so much peace I know that was the perfect name for his lil soul. Plus Michael & I really wanted a nature name," she said.

Morgan plays Toni Topaz on Riverdale, which is in the midst of its fifth season on The CW. The series co-stars KJ Apa, Lili Reinhart, Camila Mendes and Cole Sprouse.

TV // 8 minutes ago
Stella Baker: 'Republic of Sarah' brings hope to politics
LOS ANGELES, June 14 (UPI) -- Stella Baker plays a schoolteacher who finds herself running her own country on The CW's drama "The Republic of Sarah," out Monday. 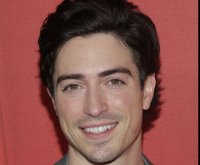