Feb. 26 (UPI) -- Prince Harry toured Los Angeles and visited the house used in The Fresh Prince of Bel-Air alongside James Corden on The Late Late Show.

Corden picked up Harry on Thursday's show in a double-decker bus to drive him around the city.

The late-night host provided tea and brought him to the Fresh Prince of Bel-Air house, noting that it would be the perfect residence for Harry. Corden used Harry's phone to FaceTime Meghan Markle about buying the property, but was unable to get the duke and duchess of Sussex to budge.

During the bus tour, Harry recalled when he knew Markle was the one.

"The second date I was starting to think wow, this is pretty special. It wasn't so much where we went it was just the way that we hit it off with each other and we were just so comfortable in each other's company," Harry said.

Harry also gave his thoughts on Netflix's The Crown.

"They don't pretend to be news, it's fictional but it's loosely based on the truth. Of course, it's not strictly accurate. It gives you a rough idea about what that lifestyle, what the pressures of putting duty and service above family and everything else, what can come from that," Harry said.

"I'm way more comfortable with The Crown than I am seeing the stories written about my family or my wife or myself," he added.

Harry, 36, and Markle, 39, stepped down from their royal duties last year and moved to the United States. The couple, who got married in 2018, are expecting their second child. Their son Archie is 1 year old.

TV // 6 hours ago
'You' Season 3 trailer shows Joe, Love move to suburbs with son
Sept. 17 (UPI) -- "You," a psychological thriller series starring Penn Badgley and Victoria Pedretti, will return for a third season on Netflix in October. 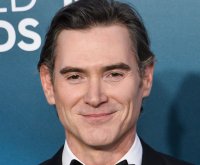 TV // 13 hours ago
Billy Crudup: 'Morning Show' S2 continues to contribute to cultural discussion
NEW YORK, Sept. 17 (UPI) -- Billy Crudup says the writers and producers of his Me Too- and Time's Up-themed dramedy, "The Morning Show," found a new way to stay relevant by realistically depicting the mayhem of 2020. 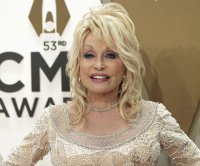