'The Great Escapists': Richard Hammond is shipwrecked in first trailer

Jan. 5 (UPI) -- Richard Hammond (The Grand Tour) and Tory Belleci (Mythbusters) are shipwrecked on a deserted island in the first trailer for Amazon's The Great Escapists.

The duo use scrap and anything else they can find to survive on the island and turn it into a competitive playground in the clip released on Tuesday.

Hammond and Belleci bicker as they construct a makeshift fort, tank, boat and fruit launcher.

"We've both gone mad," Hammond says to the camera.

The Great Escapists is set to premiere Jan. 29 on Amazon's Prime Video. The series hails from Hammond's Chimp Productions.

Amazon Prime orders Season 2 of 'The Wilds' Mahershala Ali, Jon Hamm join cast for Amazon's 'Invincible' What to watch next: Sign up for UPI's Streaming newsletter

TV // 3 hours ago
Daryl, Carol survey devastation, prepare to fight in 'Walking Dead' S11 teaser
July 25 (UPI) -- AMC has released a 1-minute preview for the 11th and final season of its zombie-apocalypse drama, "The Walking Dead." 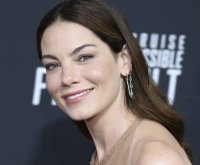