Whoopi Goldberg stars in the new adaptation of Stephen King's "The Stand," which debuts Thursday on CBS All Access. File Photo by John Angelillo/UPI | License Photo

Amber Heard arrives at the High Court in London where she was giving evidence as a defense witness in the Johnny Depp libel trial against The Sun newspaper over an article that claimed Depp was a "wife beater" on July 22. File Photo by Hugo Philpott/UPI | License Photo

Dec. 17 (UPI) -- Whoopi Goldberg said the Mother Abagail she plays in the remake of The Stand is a better developed and more conflicted version of the prophet than depicted in previous incarnations of Stephen King's post-apocalyptic epic.

King's 1978 novel had been adapted previously as an ABC miniseries in 1994.

The story focuses on the survivors of a pandemic who form two camps -- one in Boulder, Colo., where hard-working folks follow God's messenger Mother Abagail and try to rebuild society, while the other is a violent, depraved group in Las Vegas, led by Randall Flagg, who is evil incarnate.

Oscar-winning Ghost and The Color Purple actress Goldberg emphasized that the mystical figure she plays in The Stand is not God, but his servant on Earth, and she isn't always clued in on his plans.

"I needed her not to be the little old Black lady who has all the magic information. She doesn't. She is hopeful that she is right, but she is not positive. She's told everybody where to come, how to meet her, but now what? And then God stops communicating," Goldberg said in a recent virtual panel discussion for New York Comic Con.

The character had to be a fully realized person for 2020 audiences, she added.

Abagail has lived to age 108, and her own human experience helps her deal with the sudden cataclysm and her new role in leading people out of it.

"What Mother Abagail recognizes is that change comes all the time," Goldberg said. "It's a constant. It is the one thing that you always know is going to be there -- so that when she is awakened in her divineness, when it comes, she thinks, 'This is what I am supposed to do.'"

The character tries to remind herself she is only God's messenger, even when she is tempted to act without his direction as people demand answers from her that she doesn't have.

"She's very different from the person she is going up against," Goldberg said of Flagg, "because he does think he is God."

"Even though the book is about, obviously, good and evil, [it was important] that we not make the characters who follow one or the other kind of cartoonishly one thing or the other. It was very important to make Flagg seem like a viable option, somebody one could imagine people following," showrunner Ben Cavell said.

"Flagg represents, in the book, almost like an American rock-'n'-roll version of the devil," he added. "You just want to listen to what he has to say. You want to believe what he has to say. Mother Abagail and Flagg facing off on some level was a very exciting prospect for us."

X-Men and Mrs. America actor Marsden plays Stu, one of Mother Abagail's disciples, a veteran with a strong sense of morality and community.

"He's a level-headed human being who speaks only when he needs to, and when he speaks, there is real purpose behind it, and it makes him a natural leader," Marsden said.

"He believes in rebuilding society and letting goodness and kindness and all those virtues lead the way."

Also living in Boulder is Nadine, a teacher who, unbeknownst to most of the other survivors, has a psychic link to Flagg.

Aquaman actress Heard said Nadine struggles with the concept of goodness and represents selfish interests: She wants to save herself, while those around her want to protect each other.

"We meet her, like everyone else, lost and trying to literally and figuratively figure out her way and place in the world," Heard said.

"She has a long history with Flagg in ways that are not very clear and difficult to explain, but it is that sort of grooming of a relationship, and she, as a human, makes her decisions the opposite side of what a lot of our hero characters face and ultimately choose."

It actor Teague plays Harold, a bullied teen who discovers his former babysitter and lifelong crush, Frannie (Young), also survived the pandemic. They travel together and settle in Boulder.

As Frannie takes her place beside Stu as a leader, Flagg persuades Nadine to recruit the vulnerable Harold to secretly work against their friends and neighbors.

"It's not that he doesn't have empathy. It's that he hasn't had a lot of practice using it," Teague said.

The novel and script for its latest adaptation were written long before the real-life coronavirus pandemic erupted earlier this year, so viewers shouldn't see it as a response to what they are enduring now, the filmmakers said.

"It's a testament to how universal the book is and how prescient it is that it does seem to have resonance with the way the world has responded," Cavell said.

With the vast improvement in visual effects in the 26 years since the story was last told on screen, and the freedom that comes with creating a project for streaming as opposed to broadcast television, "It felt like this was time to tell this story again," Cavell added.

Elmore relished having the chance to update the tale using a more modern lens.

"And looking at the world like it is now and not like it was in 1978," Elmore said. "It gave us a lot of opportunities to deepen characters and cast differently."

TV // 4 minutes ago
Nathanya Alexander: 'Genera+ion' episodes reveal Arianna's vulnerable side
LOS ANGELES, June 24 (UPI) -- "Genera+ion" star Nathanya Alexander describes the upcoming struggles for her teenage character, and the homework she did to elaborate on her role. 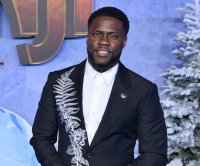 TV // 17 hours ago
Quentin Tarantino on naming son Leo: 'He was our little lion'
June 23 (UPI) -- Quentin Tarantino discussed why he named is infant son Leo and the history of film novelizations while appearing on Jimmy Kimmel Live.