Oct. 26 (UPI) -- Chilling Adventures of Sabrina will return to Netflix in December.

The streaming service shared a premiere date, Dec. 31, and teaser trailer for Part 4 on Monday.

The preview shows Kiernan Shipka "back in action" as teenage witch Sabrina Spellman. The characters face great peril and an impending war.

Part 4 will see The Eldritch Terrors come to Greendale. Sabrina (Shipka) and the coven must fight each threat one-by-one, which lead up to The Void, or the End of All Things.

Chilling Adventures of Sabrina is based on the Archie comic book series of the same name. The series is a dark reimagining of Sabrina's origins.

"Working on Chilling Adventures of Sabrina has been an incredible honor from day one. The cast, beginning with Kiernan as everyone's favorite teen witch, has been an absolute joy," Aguirre-Sacasa said in July. "I am beyond thankful to the crew, writers, editors, assistants, and everyone for pouring so much love into this dark dream of a show."

'The Midnight Sky': George Clooney is alone in the Arctic in first teaser 'Love is Blind' star Mark Cuevas expecting first child Netflix: What's coming and going in November 2020 What to watch next: Sign up for UPI's Streaming newsletter 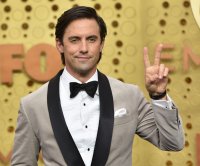 TV // 9 hours ago
Milo Ventimiglia says 'This is Us' ending is 'bittersweet'
Jan. 25 (UPI) -- Milo Ventimiglia discussed filming the sixth and final season of "This is Us" on "Late Night with Seth Meyers."

TV // 11 hours ago
'The Lost Symbol': Peacock cancels series after one season
Jan. 25 (UPI) -- "The Lost Symbol," an action-adventure series based on the Dan Brown novel, won't return for a second season at Peacock.