Oct. 14 (UPI) -- Bachelorette Clare Crawley appeared on Jimmy Kimmel Live to address the rumors surrounding the latest season of the reality series, which began on Tuesday.

Multiple reports have said Crawley will exit The Bachelorette early after falling in love with one of Season 16's contestants and Bachelor Season 23 contestant Tayshia Adams will reportedly replace her.

"I can confirm that's false," Crawley said. Kimmel then continued to ask about Adams replacing her.

"I promise you, I showed up. I was there for the journey. I was there to fall in love and I saw my season through to find out what I was looking for," Crawley said.

Crawley also said that she has never met Adams and would not answer who she thinks Adams will give the final rose to.

"Jimmy, I could have sworn I'm the one sitting here. I am the Bachelorette, so what are we talking about here?" Crawley said while smiling. 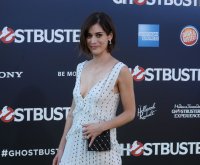