Rashida Jones, on Monday, said that she would meet celebrities including the Sinatra family, Michael Jackson and more through her father and that hanging out with famous people was normal for her growing up.

"I think growing up in the 70s and the 80s probably fixed a lot of problems that in your head you would imagine because there's no social media, there's no technology basically except for landlines and Betamax," Rashida Jones said.

"I was definitely aware that you know, the people around me were beloved worldwide, but not really because there was no Internet," she continued.

Rashida Jones also discussed visits from the late Jackson who her father worked with throughout his career. The actress said she was present during the recording of Jackson's 1982 album Thriller.

"He was like a kid when my dad first started working with him, so he was just happy to hang out. He'd sometimes bring his boa constrictor, his chimp. It wasn't, you know, your normal family friend," Rashida Jones said.

Rashida Jones stars with Bill Murray and Marlon Wayans in new film On the Rocks from director Sofia Coppola. The film is in select theaters and premieres on Apple TV+ on Oct. 23.

Rashida Jones told Kimmel that Wayans wasn't in the same car as herself, Murray and Coppola to watch the movie at its drive-in premiere because the comedian has been touring during the COVID-19 pandemic.

"I want nothing more than to hug Marlon, I love Marlon, but like I can't, we can't take that chance. It was Bill's 70th birthday that would have been not cool," Rashida Jones said.

'On the Rocks' trailer: Bill Murray plays Rashida Jones' dad in Sofia Coppola film Will Arnett says having baby during pandemic has been 'delightful' What to watch next: Sign up for UPI's Streaming newsletter 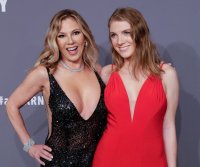