Sept. 25 (UPI) -- Norman Reedus says his Daryl Dixon spinoff will have a different feel than The Walking Dead.

Reedus plays Daryl on TWD and will reprise the character in an AMC spinoff centering on Daryl and Carol Peletier (Melissa McBride). Reedus confirmed the spinoff will take place after the events of TWD.

"It's a different type of a show. It will be completely different," he said.

Reedus played coy when asked if the spinoff means Daryl will survive TWD.

"You never know. You can't say that. Who knows. But if you went to Vegas, I would bet that I would make it," he said.

AMC announced this month that TWD will end with an expanded, two-year 11th season. On Jimmy Kimmel Live!, Reedus said he has returned to set amid the coronavirus (COVID-19) pandemic.

"We have all these protocols now. We have to take COVID tests three times a week. We got the epidemiologist from the Pentagon during the SARS scare is our on-set doctor now," he said. "There's a whole thing going on over here."

Reedus said TWD cast is filming "six mini episodes" that will serve as an extension of the Season 10 finale that was delayed because of the health crisis.

"Then we'll go into a full season that will be two seasons worth of filming. So I'm going to be here forever," the actor said.

"It basically will come out as two seasons, but we're going to shoot it as one giant season without stopping," he added.

'Walking Dead' to end with expanded 11th season 'The Simpsons': Alex Desert to voice Carl in Season 32 premiere Mandy Moore expecting first child with Taylor Goldsmith What to watch next: Sign up for UPI's Streaming newsletter

TV // 12 hours ago
Jack Huston to star in Amazon's 'Expats' series
June 18 (UPI) -- Jack Huston is set to star in the television adaptation of Janice Y.K. Lee's novel, "The Expatriates."

TV // 13 hours ago
'Never Have I Ever': Devi juggles Ben, Paxton in Season 2 trailer
June 18 (UPI) -- "Never Have I Ever," a comedy-drama series created by Mindy Kaling, will return for a second season on Netflix in July.

TV // 13 hours ago
Kenya Barris on 'We the People': 'I want people to start a conversation'
June 18 (UPI) -- Kenya Barris discussed his upcoming Netflix animated series "We the People" and "Black-ish" ending while appearing on "The Tonight Show Starring Jimmy Fallon." 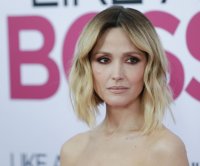