View this post on Instagram
You heard it here last Yes, it's true, I am not coming back to #RHOBH. Thank you to @bravotv, @evolutionusa, @bravoandy and all of the amazing women for the support (and the shade) for the past three years. Back to the shadows I go A post shared by Teddi Mellencamp Arroyave (@teddimellencamp) on Sep 22, 2020 at 3:58pm PDT

In an Instagram post Tuesday, the 39-year-old television personality confirmed her exit from the Bravo series after three seasons.

"You heard it here last," Mellencamp wrote. "Yes, it's true, I am not coming back to #RHOBH. Thank you @bravotv, @evolutionusa, @bravoandy and all of the amazing women for the support (and the shade) for the past three years. Back to the shadows I go."

Mellencamp elaborated in a video featuring her daughter Dove, 6 months. Mellencamp told fans she was not asked back for RHOBH Season 11.

"I recently found out that my contract as a housewife is not being renewed," the star said. "Of course I could give you the standard response of 'we both came to the decision that it would be best' ... nah. I'm not going to do that."

"Of course when I got the news I was sad," she added. "It feels like a breakup almost, because you develop such strong relationships with the cast, with the crew, and you get to do incredible things that you probably never get to experience without the show."

Mellencamp said she is "really looking forward to the future" and is focusing on her family and friends.

"I really feel like I have some exciting things ahead. And you know what? I'm pretty busy with this lil' nuggs," she said, referencing Dove.

Mellencamp joined RHOBH in Season 8. She was involved in the #PuppyGate scandal in Season 9 and in the drama over Denise Richards' alleged affair with Brandi Glanville in Season 10.

Richards confirmed earlier this month that she is leaving RHOBH after two seasons.

Mellencamp, the daughter of singer John Mellencamp, married Edwin Arroyave in July 2011. In addition to Dove, the couple are parents to daughter Slate, 7, and son Cruz, 6. 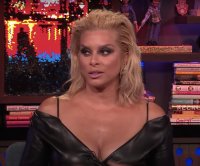