Jason Sudeikis: 'Ted Lasso' 'a little nicer' than in sketches

Jason Sudeikis says Ted Lasso is a little nicer and a little smarter than he was in the NBC Sports shorts. Photo courtesy of Apple TV+

LOS ANGELES, Aug. 13 (UPI) -- Ted Lasso, the character whom Jason Sudeikis plays in his new Apple TV+ series, seems like someone he might have created on Saturday Night Live. In fact, the character comes from a series of shorts the 44-year-old did for NBC Sports.

Sudeikis was surprised that NBC Sports asked him to continue playing Lasso in subsequent shorts, let alone that he got his own series years later.

Sudeikis premiered his Ted Lasso character when NBC began to broadcast Premier League soccer in 2013. The Ted Lasso shorts introduced the sport to American audiences with a film in which American football coach Lasso (Sudeikis) travels to England to coach the Tottenham Hotspurs.

In the short, Lasso meets Premier League participants and becomes frustrated. In a press conference, he talks about playing in quarters until a reporter corrects him that soccer is played in halves. Lasso becomes even more red-faced when he says every game ends with a winner. He is infuriated to find out soccer can end in a tie.

Sudeikis said the writers of the shorts originally wanted him to play a screaming coach like on Saturday Night Live. Lasso does scream at soccer players in the first short, but Sudeikis said his second NBC Sports spot featured more humor than anger.

"I believe the thing we unlocked in the second commercial was this sort of indomitable spirit, enthusiasm and hopefulness that is Ted," Sudeikis said.

The Apple TV+ series replaces the real Tottenham Hotspurs with the fictional AFC Richmond and promotes Lasso to manager. The series embraces the kinder, gentler side of Lasso.

Instead of the ugly American archetype the shorts depicted, the series finds Lasso genuinely trying to learn British sports and customs. Sudeikis said Lasso had to be kinder and more intelligent to sustain 10 episodes.

She "loves Ted Lasso, the character and the spots," Sudeikis said. "She's like, 'You should do that as a show.' I'm smart enough to know to listen to her."

The couple is engaged and together have two children, Daisy and Otis.

The same soccer quarters-halves and winners-tie jokes from the first short, as well as a few other jokes, reappear in the series. In a 30-minute episode, Sudeikis said such jokes can play out longer.

Instead of ending the scene when Lasso embarrasses himself, scenes in the series can continue. For example, they depict Lasso trying to cover a faux pas while mining more comedy out of an embarrassing moment.

"[We're] still allowing Ted to be a little dim with areas, but more from a place of childlike enthusiasm than necessarily being a complete buffoon," Sudeikis said.

The shorts offered a way for NBC Sports to explain soccer to its American viewers in the guise of a comedy sketch. To keep audiences engaged for 30 minutes, and 10 episodes, Sudeikis wanted the other characters on Ted Lasso to be as memorable as the main one..

"It's more fun to succeed and fail as a group than necessarily as an individual," Sudeikis said of the cast's exploits.

As a series, Lasso and AFC Richmond are on a journey. The shorts only had to entertain viewers long enough to promote the game airing on NBC. In the series, Sudeikis hopes audiences root for Lasso and the team.

"What if Nora Ephron wrote a sports film?" Sudeikis said. "As funny as the show is, it goes to some sweet, sincere and heartfelt places, too."

Ted Lasso premieres with three episodes Friday on Apple+, and a new episode every Friday.

Selena Gomez 'so creeped out' by cameras in her home 'Don't Look Deeper': Catherine Hardwicke goes '15 minutes in the future' Seth Rogen takes on dual roles in 'American Pickle'

TV // 11 hours ago
Leslie Grossman says adoption has been a 'life-affirming experience'
Oct. 21 (UPI) -- Leslie Grossman discussed being adopted and adopting her daughter Goldie while appearing on "The Drew Barrymore Show."

TV // 14 hours ago
BBC offers first look at David Tennant, Stanley Tucci in 'Inside Man'
Oct. 21 (UPI) -- The BBC has released the first images from its upcoming miniseries, "Inside Man."

TV // 14 hours ago
Issa Rae recalls advice given for 'Insecure' finale: 'Don't 'Game of Thrones' it'
Oct. 21 (UPI) -- Issa Rae discussed ending her HBO series "Insecure" with its fifth and final season while appearing on "The Late Show with Stephen Colbert." 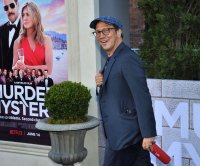