Song plays Anne Boonchuy, a 13-year-old girl who is magically transported to a world filled with frogs that act and talk like people. The series' vocal ensemble also includes Justin Felbinger, Amanda Leighton and Bill Farmer.

The show was created by Matt Braly of Gravity Falls fame.

"Matt's vision, authentic storytelling and undeniable passion for his characters have brought the fantastical world of Amphibia to life for kids and families around the world. We are excited for viewers to follow Anne and the Plantars as they go on new adventures in season two and unravel more mysteries through Season 3," Meredith Roberts -- senior vice president/general manager of television animation for Disney Channels -- said in a press release. 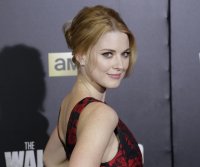