June 21 (UPI) -- Broadway star Mattea Conforti said she leaped at the chance to play a vampire child on AMC's horror-drama NOS4A2 because it was so unlike the parts she played in the past.

"I wanted to expand my acting range and see how much more I could do because I was really focused on very different roles at the time, and shifting from Disney roles to Millie Manx was very different. I wanted to see how I could handle that," the 14-year-old actress told UPI in a recent phone interview.

In addition to singing and dancing her way through the New York stage productions of Matilda and Frozen, Mattea also voiced the character of young Elsa in the animated movie Frozen 2 and played Elisa Marie on the Starz drama, Power.

The screen adaptation of Joe Hill's novel NOS4A2 casts Mattea as the daughter of Charlie Manx (Zachary Quinto,) an immortal monster who feeds off of the souls of the children he kidnaps from what he considers bad parents and then deposits what is left of them in a creepy, holiday-themed world called Christmasland.

Ashleigh Cummings plays Vic, a teen who discovers she has the power to teleport and find lost objects. She uses this special ability to try to free the children and stop Charlie.

"Season 2 picks up eight years after the first season ends, and the season really focuses on Charlie's desperation to get revenge on Vic McQueen," Mattea said.

The actress said there is more to Millie than her terrifying voice, appearance and demeanor.

"Even though it may not seem like it, she is definitely loving," Mattea said.

The biggest challenge in playing the role is getting audiences to see this other side of Millie.

Quinto may play an evil creature, but Mattea said he is a wonderful co-star.

"He's a very fun actor to play with. He is definitely a very true professional actor. He can be serious when he needs to be, though," she said.

The actress was surprised to be hired for the show after first auditioning via video.

"I never thought that anything could come from it because it was a self-tape. Usually, I land all my roles in appointments, in person, so it was a really fun experience," she said.

Working on television was also a vastly different experience than performing in theater, Mattea noted.

"When you are on stage, your movements have to be more dramatic and bigger and more exaggerated so everyone in the audience can read it," she explained.

"When you are working on television, your movements can be more subtle, and not everything has to be so exaggerated because the camera is right up close to your face and can read everything so specifically."

Although she misses the energy that a live theater audience provides, she said she gets helpful feedback on her performances from the directors on NOS4A2.

"But it may not be as loud or exaggerated as an audience laughing or gasping," Mattea said, adding she hopes to continue working in both theater and television.

"My family is so supportive, and they sacrificed so much for me." she said. "I am so lucky that I have such a supportive and loving family that will stand by me no matter what because all they want is for me to be happy. I am so grateful that I'm stuck with these people, especially in [coronavirus] quarantine."

Cast says Seth Green's 'Crossing Swords' is the laugh we all need Ben Whishaw lands lead in new series 'This is Going to Hurt' Stars say 'Central Park' celebrates family, musicals, being outside

TV // 21 hours ago
Michael Che won't censor HBO Max show for kids
April 19 (UPI) -- HBO Max released a teaser for "That Damn Michael Che" on Monday. In the teaser, Che jokes about letting kids see everything he presents on the show. 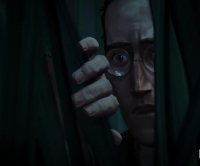