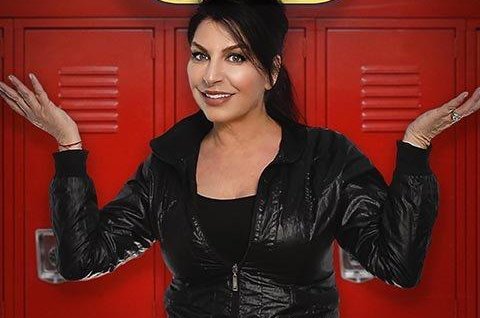 LOS ANGELES, March 17 (UPI) -- Tammy Pescatelli was worried that her comedy special, Way Afterschool Special, was premiering on St. Patrick's Day. She feared people would be out celebrating instead of watching her act.

But now that cities are shutting down bars and other venues as a coronavirus precaution, she promises to make people laugh when they're stuck at home.

"There are upsides to coronavirus," Pescatelli joked with UPI in a phone interview. "Maybe people will be inside trying to laugh."

Pescatelli said almost no subject is off the table for comedy -- the coronavirus included. The one topic she would not make light of is children. She said two Amber alerts went off during the taping of her special, and she just paused and waited for them to end.

"You can make anything funny except for something that involves children like that," Pescatelli said. "It's in the immediacy. I wouldn't do that. It makes you seem like a horrible human being."

Comedy Dynamics scheduled Tammy Pescatelli: Way Afterschool Special in March for Women's History Month. Its Women of Comedy month also includes specials from Mary Prankster and Nicole Blaine and the film The Social Ones, from Laura and Danielle Kosann.

Pescatelli also had a 10-minute set in Showtime's More Funny Women of A Certain Age on Saturday and has a film, That's Amore, opening soon. Twenty-five years into her standup career, at age 50, Pescatelli said her generation paved the way for today's female comics.

"Those inroads were horrible," she said. "We'd stay in condos with two strange men that I had never met before, and you didn't complain. We were sexually harassed so much I didn't know it was sexual harassment, but you grew tough."

The hardships Pescatelli endured in the industry, and personally, toughened her on stage, she said. Hecklers don't phase her.

"I wouldn't change a minute of it because it's made me exactly who I am," she said. "Now I can put up with anything, and by the way, a heckler can't hand it to me. There's nothing a heckler can do that hasn't been done in my crazy Italian family."

Some of those hardships include not disclosing her pregnancy. In 2008, Pescatelli became pregnant with her son. Her agent instructed her to hide her pregnancy.

"I hid it for five and a half months," Pescatelli said. "There's no maternity leave in comedy, so I was on stage the night before I gave birth. Now it's wonderful to see some of these young girls who are coming out like an Ali Wong. They come out with these specials, and they're pregnant, and I'm like hats off, that's amazing."

Both of Pescatelli's specials, Way Afterschool Special and her 2013 special Finding the Funny, have a female empowerment theme song, too. Tony Bambino composed her theme song, She's a Funny Lady, in the style of a Frank Sinatra or Dean Martin diddy.

"It feels like me," Pescatelli said. "I'm a throwback. I'm an old Rat Packy kind of person. I wish I was around in those times. I feel like I missed my generation. I love it."

Although she acknowledges some gender-specific hurdles over which she leaped, Pescatelli never let it interfere with her material. She notes her audience crosses genders and ages.

"I always wrote my act as if we were all friends, and I just hadn't seen you in a long time," she said. "I never wrote my act that was gender exclusive. I sell 54 percent of my tickets to men because they feel included."

Way Afterschool Special was filmed in the auditorium of Pescatelli's high school, Terry High School in Terry, Ohio. Her act includes jokes about the differences between her generation and millennials, and the after-school specials she watched growing up.

"I made the mistake," Pescatelli said. "I didn't realize that until after. It's funny. When you film a special, and then it takes like two years to come out, you find out all these answers."

A lot of Way Afterschool Special involves Pescatelli reminiscing about her family and childhood. She says she was inspired by watching her then 10-year-old son's personality develop.

"It took me about three, four years to put that [material] together, and that was right as my son was becoming a human," Pescatelli said. "Babies are babies, but [when he started] having interests and observations of his own life, it reminded me of my childhood."

The Terry High guidance counselor once told Pescatelli she would never be on TV. So it was significant to her to bring her act back to her school.

"Twenty-five years later, I went home, and I put everybody in the town that wanted to be on TV on TV," Pescatelli said. "I went to tell her off. She was dead, but either way it still works."

The audience included Pescatelli's former teachers, classmates, their kids and some of their parents.

"I even went back and spoke at their graduation that year and created a scholarship that every year we put together for the arts," she said.

Pescatelli will be back on the road with new material and expects to have another full hour by 2021.