'I Am Not Okay with This' introduces Syd, Stanley in teaser trailer

Netflix is giving a glimpse of the new series I Am Not Okay with This.

The preview shows Stanley (Oleff) pick up Sydney (Lillis) as she walks to school through their small town. The clip ends with a shot of the pair driving together in Stanley's yellow car.

I Am Not Okay with This is based on the Charles Forsman graphic novel of the same name. The series follows Sydney as she navigates high school and her newfound superhuman powers.

I Am Not Okay with This hails from Jonathan Entwistle (The End of the [Expletive] World) and Christy Hall. Shawn Levy and Dan Cohen (Stranger Things) serve as executive producers.

Lillis and Oleff are known for playing Beverly and Stanley in It and its sequel, It: Chapter Two.

I Am Not Okay with This starts streaming Feb. 26.

TV // 3 hours ago
Jean Smart: For stand-up comedy you 'have to be a good actor'
LOS ANGELES, May 13 (UPI) -- Emmy winner Jean Smart plays a veteran Las Vegas stand-up comic in new HBO series "Hacks," and says her years of being an actress helped her in the role. 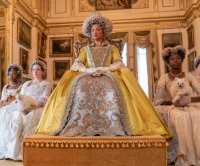