Jan. 29 (UPI) -- Ben Schwartz appeared on Jimmy Kimmel Live and discussed his role as the voice of Sonic in the upcoming Sonic the Hedgehog film, based on the long-running video game series of the same name.

"It's crazy because I played it in 1991, I was a huge fan of the games. Then when they were making this film and they asked if I would do it, it's like a dream come true because now I get to be the voice," Schwartz said.

"Just like how your son was introduced to it then, maybe some people watch it now and I'll be the way that they are getting introduced to the character, it's crazy. It blows my mind," he continued in reference to how Kimmel's son was into Sonic when he was younger.

Sonic the Hedgehog, from director Jeff Fowler, also stars Jim Carrey as the villainous Dr. Robotnik and James Marsden as Sonic's new friend Tom. A younger version of the title character known as Baby Sonic will also make an apperance in the film.

Schwartz, best known for portraying Jean-Ralphio on Parks and Recreation, also discussed with Kimmel how he wrote jokes for Anthony Daniels' C-3PO in Star Wars: The Rise of Skywalker.

Schwartz said he came up with C-3PO's line about being okay after falling through a sand pit and appears in the background of a photo used in Daniels' new memoir. 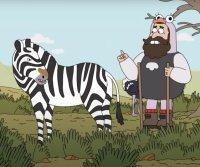