'Sex Education': Otis, Maeve are 'back in business' in Season 2 trailer

The preview shows Otis (Butterfield) and Eric Effiong (Ncuti Gatwa) start a new term at school following Maeve's (Mackey) expulsion in Season 1. Otis has given up the sex clinic he started with Maeve, but his classmates still have plenty of questions.

In addition, Otis is ready to have sex with his girlfriend, Ola Nyman (Patricia Allison), but the couple's relationship is complicated by Otis' mom, Jean Milburn (Gillian Anderson), and Ola's dad, Jakob Nyman (Mikael Persbrandt), having a hookup of their own.

Meanwhile, Eric connects with a new French exchange student as Adam Groff (Connor Swindells) is off at military school. Maeve blackmails Adam's dad, Headmaster Groff (Alistair Petrie) into letting her return to school, and she and Otis appear to start up the clinic again.

"It's good to be back in business," Otis says at the end of the trailer.

Sex Education is created by Laurie Nunn and debuted on Netflix in January. The series follows Otis, the son of a renowned sex therapist (Anderson), as he sets up a sex advice business to help his classmates.

TV // 4 hours ago
Rob McElhenney, Charlotte Nicdao: Pandemic brought 'Mythic Quest' characters closer
LOS ANGELES, May 7 (UPI) -- The stars and creators of Apple TV+'s "Mythic Quest" address the aftermath of their special "Quarantine" episode and how it will impact office relationships in Season 2.

TV // 19 hours ago
PBS renews 'Sanditon' for Seasons 2 and 3
May 6 (UPI) -- Masterpiece on PBS announced on Thursday that "Sanditon" has been renewed for a second and third season. 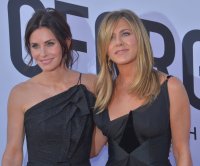 TV // 19 hours ago
Courteney Cox on 'Friends' reunion: 'It was unbelievable'
May 6 (UPI) -- Courteney Cox, who played Monica Gellar on "Friends," teased the show's upcoming reunion and recalled dancing in a fountain with her co-stars. 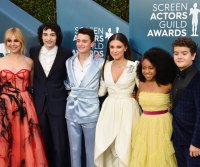