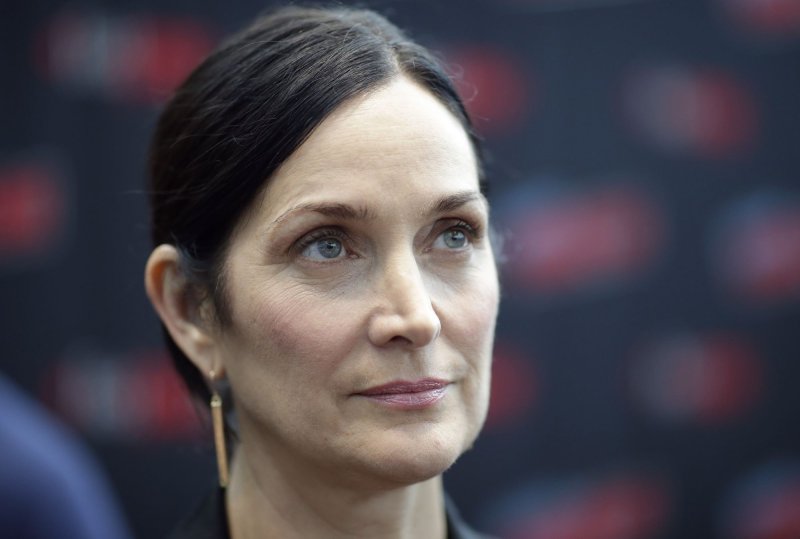 Carrie-Anne Moss of the series "Tell Me a Story" arrives for photos at New York Comic Con on October 3. File Photo by John Angelillo/UPI | License Photo

NEW YORK, Dec. 5 (UPI) -- The Matrix icon Carrie-Anne Moss said her momager character Rebecca Pruitt crosses into all three fairytales of Season 2 of the anthology series Tell Me a Story.

Set to debut on CBS All Access on Thursday, the new season reimagines the oft-told fables Cinderella, Sleeping Beauty and Beauty and the Beast through the eyes of creator Kevin Williamson, who is famous for his work on TV shows The Vampire Diaries and The Following.

"I play this mom who is like a momager really into her younger daughter's career. They live in this amazing home that her daughter has paid for with her success and then an event happens that shifts everything. My character has this journey back to being a mom," Moss recently told reporters at New York Comic Con.

"I was about to start filming [another project] when I got sent the script. Beauty and the Beast is one of my favorite fairytales and I love Kevin. ... I had to be a part of that, so I had a last-minute change of heart and jumped onto this one," Lind said.

The actress wears a mask and prosthetics to play the disfigured singer.

"She is very materialistic. Everything is going great, and then something very traumatic happens to her and she gets into a very bad accident," Lind revealed. "And, physically, she is totally changed and has to go through the struggle of figuring out who she is as a person instead of depending on the looks and materialistic things she has always been given her entire life. She has this incredible bodyguard Beau who protects her."

"Plot twist! I am the beauty!" said The Originals actor Eka Darville of his Story character.

"He has the demeanor of a marine, but the heart of a Boy Scout. He is a lover at heart and has strong ethics and morals that get him in trouble in his personal life and professionally. The world that he spent his life pushing toward turns out not to be black and white."

Showrunner Williamson took what lessons he learned from Season 1 -- when he explored the sinister depths of The Three Little Pigs, Little Red Riding Hood and Hansel and Gretel with a mostly different cast -- and applied them to Season 2.

"It was really hard to tell three different stories and intertwine them, so, this year, we did one family, and all of the stories are stemming from that one family. It makes it much more accessible. You can invest in the characters," Williamson said.

He also noted the Season 2 characters are better known and more relatable than those viewers followed in Season 1.

"Of course, we take all the genders and switch them and take all the tropes and mix them up. We take the characters and put a new spin on them and it's also dark and sexy."

Danielle Campbell, who has appeared in The Originals and acts in the Cinderella storyline here, added, "These aren't the Disney princesses that we've grown up with. They are definitely not what you are watching on screen."

Her frequent scene partner, Paul Wesley, said the atmosphere on the show's set is fun and collaborative, despite the traumas the actors' alter egos endure.

"It's necessary to laugh between takes," The Vampire Diaries graduate said.

"There is no laughter because it's not a comedy show. When we are off-screen, it is easy to joke around. Some of it is so dark," Campbell agreed.

Wesley and Campbell are holdovers from the Season 1 ensemble in the new roles of Tucker and Olivia.

Both said they like the idea of an anthology series with standalone seasons for which they could repeatedly work with people they like, but in completely different roles, Wesley said.

"It's not a six-season show where by Episode 4 you're like, 'Oh, my God, the storyline is already repeating itself.' It's fresh and a very challenging role, something I haven't done before," Wesley said.

TV // 3 hours ago
What to binge: 5 shows to watch while waiting for 'Manifest' S4
Aug. 8 (UPI) -- "Manifest" has had a turbulent history since its premiere in 2018 -- always on the brink of cancellation, but consistently saved in the 11th hour due to the support of its passionate fanbase.

TV // 4 hours ago
Jeffrey Wright: Bernard 'attained a type of liberation' on 'Westworld'
LOS ANGELES, Aug. 8 (UPI) -- Jeffrey Wright discusses Sunday's episode of "Westworld" and what he sees as Bernard claiming his freedom.

TV // 16 hours ago
Abbi Jacobson based 'League of Their Own' on history, not movie
LOS ANGELES, Aug. 8 (UPI) -- Abbi Jacobson, and the cast and creators of Prime Video's "A League of Their Own" discuss the historical basis for the show about the All-American Girls Professional Baseball League.