Anna Faris: 'Mom's' Christy is an 'against all odds character'

Anna Faris will be returning to her role as Christy on CBS' "Mom" when it returns for Season 7 on Thursday. File Photo by Jim Ruymen/UPI | License Photo

Sept. 25 (UPI) -- Anna Faris will be everywhere in September, with new episodes of her podcast Unqualified and Season 7 of CBS' Mom, in which she portrays Christy, a character who will still be chasing her dream of becoming a lawyer.

"She just feels like an against all odds character," Faris, 42, told UPI about Christy in a recent interview. Faris said that she loves how her driven her character is despite growing up in chaos.

Mom, which has been renewed through Season 8, follows single mother Christy, a former addict, as she tries to get her life back together while dealing with her mother, Bonnie, also a former addict. The pair's dysfunctional relationship is at the heart of the series.

Faris said she's happy the writers have kept her character consistent and true to herself, as she is more focused on her career than finding love.

"I want Christy to be happy. I want her to find love, but that's kind of awesome that my character's main focus is her career. I really admire that they stuck with it," she said.

Faris also joked about the difficulty of fake kissing another actor on set when Christy has had love interests on the show. Romantic partners have included Gabriel (Nate Corddry) and Adam (Justin Long).

"Also, I don't know how to fake kiss somebody from the couple of times that I've had love interests. I wonder if they're like, 'That didn't look great,'" Faris joked about Christy's single relationship status. "Maybe I don't even know how to really kiss somebody."

Faris, who also is known for starring roles in Scary Movie, The House Bunny and Overboard, teased on Twitter new episodes of Anna Faris is Unqualified will be arriving on Monday after the podcast went on a mini-hiatus in March.

Bill Hader, Kevin Smith, Lisa Kudrow, Keegan Michael-Key, Shay Mitchell, Jimmy Kimmel and many others have appeared on Unqualified over the course of 163 episodes, with many of the celebrities also offering advice to listeners.

"When I first started, I really thought nobody was going to listen and then to sort of have this community of people who actually listen to it, and feel passionately about it, it's such an amazing feeling," she said. "It's huge and flattering, and also I've learned a lot from our listeners."

Faris frequently partners with advertisers who are spreading a positive message on her podcast, now sponsored by Clorox, promoting clean spaces for students that help with creativity and productivity.

Faris did not disclose which celebrity guests she has lined up for Unqualified, but said Lil Kim, LeBron James and Malia and Sasha Obama are on her wishlist.

TV // 42 minutes ago
'American Idol,' 'Jeopardy!' college tournament coming to ABC in February
Dec. 2 (UPI) -- "American Idol" will return for a fifth season on ABC in February, along with the "Jeopardy!" National College Championship hosted by Mayim Bialik. 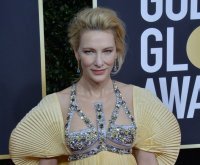