Aug. 2 (UPI) -- Dog the Bounty Hunter says some of his late wife's personal items were stolen from his family store.

"The Bible says it's an unforgivable sin to steal from the dead," Chapman wrote. "LARGE CASH REWARD FOR ANY INFORMATION FOR WHO IS RESPONSIBLE FOR THIS!!!"

Jefferson County Dispatch confirmed Friday to E! News that officers responded to a break in at Chapman's store Thursday evening.

Sources told The Blast thousands of dollars in clothing and "Dog and Beth" merchandise were taken from the store. The person also reportedly took Beth's personal bounty hunting gear and family mementos from a makeshift memorial to Beth.

Beth died June 26 at age 51 after being placed in a medically induced coma days prior. She had announced in 2017 she was battling throat cancer, and the disease later spread despite several surgeries.

"It's 5:32 in Hawaii, this is the time she would wake up to go hike Koko Head mountain. Only today, she hiked the stairway to heaven. We all love you, Beth. See you on the other side," Chapman tweeted in June.

Chapman shared his grief in an interview June 27.

"You kind of try to remember that you're celebrating life, but right now we're mourning the death," he said.

A public memorial for Beth aired as the TV special Celebration of Life for Beth Chapman in Colorado in July. 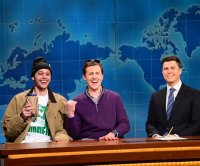