'Real Housewives of Atlanta': Kenya Moore to return in Season 12

People reported Wednesday the 48-year-old television personality will star in the new season following a one-season absence from the Bravo series.

"It's going to be a great season," a source said.

Moore confirmed the news in an Instagram post Wednesday. She shared a photo of herself holding a peach on set, which appears in the show's opening sequence.

"I was so hungry so I snatched a [peach]," the star captioned the post.

The Real Housewives of Potomac star Monique Samuels was among those to react in the comments.

"Oooooh buddy! I can't wait for this upcoming season," she wrote.

Moore starred in Seasons 5 through 10 of The Real Housewives of Atlanta. She appeared in the Season 11 finale, which caused drama between Cynthia Bailey and NeNe Leakes.

News of Moore's return follows the birth of her first child, daughter Brooklyn Doris. Moore and her husband, Marc Daly, welcomed their baby girl in November.

"Thank you @kandi for the teething necklace @thebrooklyndaly loves it. Good job @acewellstucker she loves everything," she wrote.

Thank you @kandi for the teething necklace @thebrooklyndaly loves it. Good job @acewellstucker she loves everything ️ 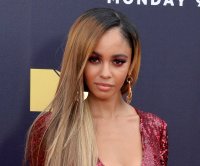