May 30 (UPI) -- Shailene Woodley says working with Meryl Streep was a "next level" experience.

"Meryl's just so good. She's so good," Woodley said of Streep, a three-time Oscar winner. "It's like a masterclass in acting when you're working with her because you're trying to learn and be present at the same time."

"She's truly next level," she added.

"The first day of the second season, I had to work with Meryl Streep," the actress said. "Which is so exciting but also completely terrifying. I think I barely got out words."

Nicole Kidman, Keith Urban sing 'Your Song' ahead of premiere Reese Witherspoon faces off with Meryl Streep in 'Big Little Lies': 'We have words' Emilia Clarke 'blown away' by fans raising $45K for her charity Christina Anstead recalls 'instant connection' with husband Ant

TV // 16 hours ago
'MacGruber': Will Forte, Kristen Wiig reunite in new trailer
Dec. 6 (UPI) -- Will Forte is on a new mission and is reunited with Kristen Wiig in the latest trailer for Peacock's MacGruber. 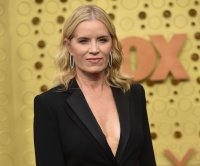