'Son' lures Pierce Brosnan back to TV decades after 'Steele' 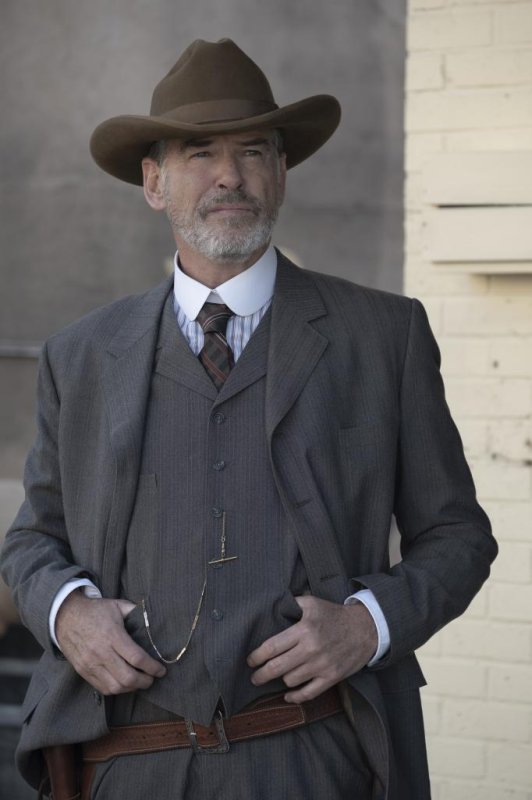 Actor Pierce Brosnan's "The Son" returns for its second and final season on Sunday. Photo courtesy of AMC

April 27 (UPI) -- Pierce Brosnan says he was happy to return to the small screen in the period drama The Son decades after starring in the 1980s detective dramedy Remington Steele.

"TV is such a brilliant landscape of entertainment now," the 65-year-old Irish actor told UPI in a recent phone interview.

"The work is so nuanced and character-driven and you have the luxury of 10 episodes or eight or however many to indulge yourself and the audience in the life of a character."

A fan of Philipp Meyer's 2013 novel about three generations of a Texas cattle ranching family, Brosnan said he accepted the "rich, textured" role of patriarch Eli McCullough when friend Sam Neill backed out of it.

"I love that point of history and, being brought up on a staple of cowboys and Indians going to the cinema as a boy in Ireland, it was very much in my wheelhouse," Brosnan said.

The story is set primarily in the early 20th century, with flashbacks to the 1850s. Co-starring Henry Garrett, Zahn McLarnon, Jess Weixler, Paola Nunez and Sydney Lucas, Season 2 is to premiere on Saturday on AMC.

Young Eli was raised by the Comanche tribe who murdered his settler family. As an adult, he becomes a ruthless businessman, pressuring his sons to protect McCullough interests at all costs, even when it means swindling -- and eventually killing -- his wealthy Mexican neighbors following an oil discovery.

Set more than a century ago, the series features themes that might feel familiar to modern audiences.

"That is kind of the joy of the show -- the relevance of history, then compared to now, the power struggles, the oil, the greed and the manipulation of a culture or society by one man in the community," Brosnan said.

The real-life father of four sons connected to Eli as a parent and an immigrant.

"Being displaced in life a few times... I knew something of that mechanism of mankind to fit in, to be part of society. But that's where the similarities ended," said the actor, who emigrated from Ireland to England when he was 11, and then from England to the United States as an adult.

The Son wasn't Brosnan's first foray into screen westerns. He played a Union soldier hunted by a Confederate colonel through the American Southwest after the Civil War in the 2006 movie Seraphim Falls.

Although the stories are completely different, the actor noticed similarities in the men at the center of them.

"There is a certain residue and resonance of the man who is cleaved from the earth and connected to the earth with a horse," Brosnan said, noting both characters have a "kill or be killed" code, while trying to do the right thing within those parameters and, ultimately, falling short.

AMC recently announced that Season 2 of The Son will be its last.

"I think they felt that they had told the story," Brosnan said about the decision not to bring the series back for a third season. "That's as much as I know. I was quite happy to have done my two seasons and move on."

The actor took a break after he finished filming The Son in March 2018.

"Eli, I think, has always stayed with me. I love the hats," he laughed. "I have a collection of cowboy hats and I am growing a beard, at the moment, for this next job."

"It's extremely relevant within the genre of a horror movie to what goes on in our society with the world of fertility and fertility doctors. It's a character that I've never played before," Brosnan said, careful not to reveal too many details.

The erstwhile James Bond -- who has also appeared in beloved movies such Mamma Mia!, The Matador, Dante's Peak, The Mirror Has Two Faces, The Thomas Crown Affair and Mrs. Doubtfire -- has no intention of retiring any time soon.

"I've been an actor all my life. I wished and wanted and desired to be one and, hopefully, to have employment and sit at the table as long as I can," said Brosnan whose credits include the TV miniseries Bag of Bones, Around the World in 80 Days and Noble House.

TV // 4 days ago
Noah Wyle: 'Leverage' character Harry is flawed, but trying to be less so
NEW YORK, Nov. 23 (UPI) -- Noah Wyle says Harry, the shady lawyer he plays on "Leverage: Redemption," is a flawed man looking to be less flawed.