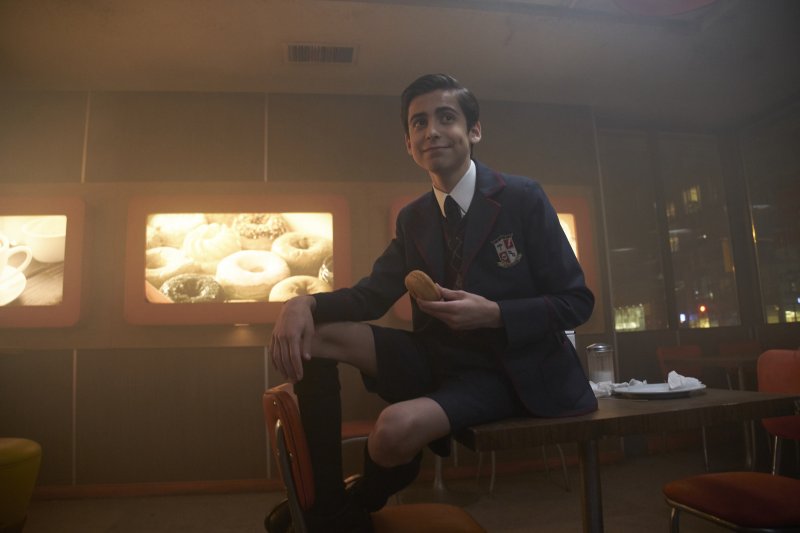 Aidan Gallagher in a scene from "The Umbrella Academy," which is now streaming. Photo courtesy of Netflix

"I get to play a 58-year-old time-traveling assassin, who comes back from the future to save the world from the apocalypse," the 15-year-old actor told UPI. "This was a dream role for any teen and, for me, it was a role of a lifetime."

When he went to audition to play Number 5, Gallagher was a huge fan of Gerard Way's Umbrella Academy graphic novels, which spin the tale of a dysfunctional family of washed-up superheroes who reunite after the death of their wealthy, manipulative, adoptive father.

"Gerard said I was Five in every way, and I couldn't have been happier to hear it," Gallagher said, recalling how he asked to take a photo with the scribe when they first met. "To my surprise, he said he watched my old show with his daughter and needed a selfie with me for her."

Way, famous as the frontman for rock band My Chemical Romance, which split up in 2013, went on to release a solo album, but has since focused on the graphic novels.

The Umbrella Academy debuts Friday. When it starts, the brilliant and arrogant Five will have been missing for more than a decade.

Unbeknownst to his siblings -- played by Ellen Page, Tom Hopper, Robert Sheehan, Emmy Raver-Lampman and David Castañeda -- Five has been trapped in the future for 45 years.

Five knows when the world will end and travels back to his original timeline to get his family to help him save it. There are several problems, though: he only has eight days to prevent the apocalypse; the time police (played by Mary J. Blige and Cameron Britton) are trying to stop him; and Five still looks like he is only 13.

"He's shaken to his core. He's old, tired, exhausted and on the run after a lifetime of horrendous experiences," Gallagher said.

The character's unique background makes him feel wiser than his brothers and sisters and also exasperated by what he perceives to be their self-centered attitudes and behavior.

To play someone who was supposed to be 58, despite his youthful appearance, Gallagher focused on Five's physicality, which he likened to the broken-down hero Hugh Jackman played in The X-Men movie Logan.

"I became old and grumpy and irritated with everything and moved with lumbering effort and discomfort," he said.

Gallagher appreciates how rare it is for a young actor to quickly and successfully make the transition from a high-profile kids' comedy to a prestigious adult drama.

"That just doesn't happen," he said.

After four seasons on Nicky, Ricky Dicky & Dawn, Gallagher hoped to move into independent films, but he was offered The Umbrella Academy part first.

"For this role to come along only a month after my comedy series ended was like winning the lottery," he said, adding the sarcasm and irony his previous character for which Nicky was known came in handy when creating the character of Five.

His years on the sitcom also taught him a lot about the technical side of television, as well as the importance of being professional, showing respect to the cast and crew, and knowing his lines.

Those lessons have been useful in his new job.

"I know how much money goes into every minute of production and how many people are counting on me, so I don't ever want to be one to let anyone down," he said.

Gallagher has a busy acting schedule, but remains committed to maintaining excellent grades in school. He also has the distinction of being the youngest United Nations ambassador in history and works with the organization to educate young people about environmental issues.

"I'm 15 and everything I'm doing right now is really exciting to me, so, actually, whatever I'm into at the moment, I'm somehow able to stay very focused on. I just keep moving forward," he said.

In his spare time, Gallagher plays piano and guitar, and sings. He even is producing his first solo EP in his garage.

"It's therapy to me and it's my biggest passion after saving the planet from greed and polluters," he said.

The Umbrella Academy is streaming Friday on Netflix.