Miley Cyrus played a round of Name That Song with Jimmy Fallon on "The Tonight Show." File Photo by Gregg DeGuire/UPI | License Photo

Dec. 14 (UPI) -- Miley Cyrus faced off against Jimmy Fallon in the Name That Song Challenge on The Tonight Show.

The game, played on Thursday, involved Cyrus and Fallon competing to see who could correctly guess which song The Roots was performing one instrument at a time.

Fallon gained an early lead after he was able to buzz in first and correctly answer "I Love Rock 'n Roll" by Joan Jett and "Could You Be Loved" by Bob Marley.

Cyrus bounced back after getting correct "Call Me Maybe" by Carly Rae Jepsen, "9 to 5" by Dolly Parton. "I Wanna Dance With Somebody" by Whitney Houston and her own song, "Party in the U.S.A."

Cyrus took a while to guess The Roots was performing "Party in the U.S.A.," however, earning laughter from Fallon. "It took you that long to get that one?" Fallon said. "I wish I had a no. 1 song they could play."

Fallon would go on to win the game due to the final song being worth 10,000 points. The late night host was able to quickly recognize that "Just a Friend" by Biz Markie was being played. Fallon and Cyrus then led the audience in singing the song.

Cyrus also released on Thursday a cover of John Lennon and Yoko Ono's holiday track "Happy Xmas (War is Over)" featuring Mark Ronson and the son of Lennon and Ono, Sean Ono Lennon.

"He's just such an incredible being to be in the room with," Cyrus said to Fallon about working with Sean. "It's just been amazing to work with him, his voice is just so special."

.@MileyCyrus announces that she is releasing a special collaboration with @MarkRonson and @SeanOnoLennon at midnight tonight! #FallonTonight pic.twitter.com/UNd469XPWx

TV // 1 hour ago
'Feel Good' Season 2 coming to Netflix in June
May 18 (UPI) -- "Feel Good," a comedy-drama created by and starring Mae Martin, will return for a second season June 4 on Netflix.

TV // 1 hour ago
'Ragnarok' Season 2 trailer shows Magne prepare for battle
May 18 (UPI) -- "Ragnarok," a Norwegian-language fantasy series starring David Stakston, will return for a second season May 27 on Netflix. 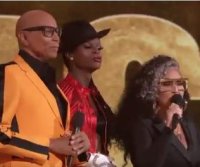