Billy Magnussen: 'Tell Me a Story' is 'scary and dark and sexy'

Billy Magnussen arrives on the red carpet at the "Me Before You" world premiere on May 23, 2016 in New York City. File Photo by John Angelillo/UPI | License Photo

Oct. 28 (UPI) -- Billy Magnussen says his psychological thriller, Tell Me a Story, couldn't be more different in tone from his 2014 movie musical, Into the Woods -- even though both have fairytale themes.

"One is Disney-fied and then this is Kevin Williamson-fied," the 33-year-old actor joked with reporters at New York Comic Con.

Tell Me a Story creator Williamson is a filmmaker known for his work on the Scream franchise, as well as the TV shows The Vampire Diaries and The Following.

"It's just playing to what the script is and what the playground is being set up as. I literally approached Tell Me a Story the same as I did in Into the Woods. You see what the world is you're in and you try to fill it with life and breath," Magnussen said, describing the new show as "scary and dark and sexy."

He said his character Nick in the "Little Red Riding Hood" storyline is a control freak, a stark contrast to the lovestruck prince he played in Into the Woods or the laid-back actor he portrayed in the Epix dramedy, Get Shorty.

"A lot of my other characters I've played have been loose and have been just kind of like going with the punches and if the wave comes, he catches the wave. He's free and happy. This guy is complicated," the actor said.

Magnussen will also soon be seen in the live-action version of the Disney animated film, Aladdin.

This is no fairy tale. #TellMeAStory is a dark and twisted psychological thriller. Come out and play this Halloween. https://t.co/RyOebwVutd pic.twitter.com/CyTeiwBO65

Alicia Witt: There's a 'massive overlap' of Hallmark and horror fans 'Timeless' movie to air on NBC Dec. 20 'Stan Against Evil' is a 'half-hour respite' from 'real horror,' creator says 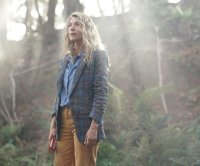 TV // 3 hours ago
Natalie Zea: 'La Brea' may be last chance to be action hero
LOS ANGELES, Sept. 28 (UPI) -- Natalie Zea describes her action heroics in the NBC series "La Brea," premiering Tuesday. Zea plays a mother who falls into a sinkhole on Wilshire Boulevard and lands in a primal world.

TV // 10 hours ago
Amazon 'The Boys' spinoff announces cast
Sept. 27 (UPI) -- Amazon Studios greenlit its spinoff to its series 'The Boys' on Monday and announced its cast. The spinoff will be set in a college for young superheroes.