'Nathan For You' ends after four seasons

Oct. 18 (UPI) -- Nathan Fielder's Comedy Central series Nathan For You will not be returning for a fifth season, the network has confirmed.

"For the past five years Comedy Central had the pleasure of working with the brilliant Nathan Fielder on Nathan For You. His innovative and quick-witted humor has made the show a comedic touchstone and we're proud to have been a part of it," Comedy Central said in a statement.

"We respect Nathan's decision to end the series and look forward to geeking out over his next project," it continued.

It remains unclear why Fielder decided to discontinue the show. Season 4 of Nathan For You wrapped up in December with a two-hour finale.

Fielder wrote, directed, executive produced and starred in the series about a consultant attempting to help real-life small businesses through the use of comedic and outlandish marketing strategies.

The series first premiered in 2013.

TV // 6 hours ago
Maya Rudolph, Andy Samberg stuffed selves hosting 'Baking It'
LOS ANGELES, Nov. 30 (UPI) -- "Baking It" hosts Maya Rudolph and Andy Samberg discussed the challenges of eating every confection made by contestants on the Christmas baking show, out Thursday on Peacock.

TV // 15 hours ago
'Chucky' renewed for Season 2, premiering 2022
Nov. 29 (UPI) -- Syfy and USA Networks have renewed "Chucky" for a second season ahead of the season finale on Tuesday. The series follows seven movies in the "Child's Play" killer doll series. 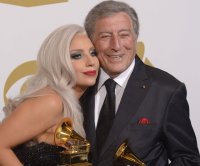 TV // 5 days ago
Andrea McArdle drops out of NBC's 'Annie Live!'
Nov. 25 (UPI) -- Andrea McArdle -- who played the titular orphan in the original Broadway production of "Annie" -- has dropped out of NBC's upcoming live broadcast of the musical.
Advertisement