Melonie Diaz happy not to play the 'best friend' in 'Charmed' 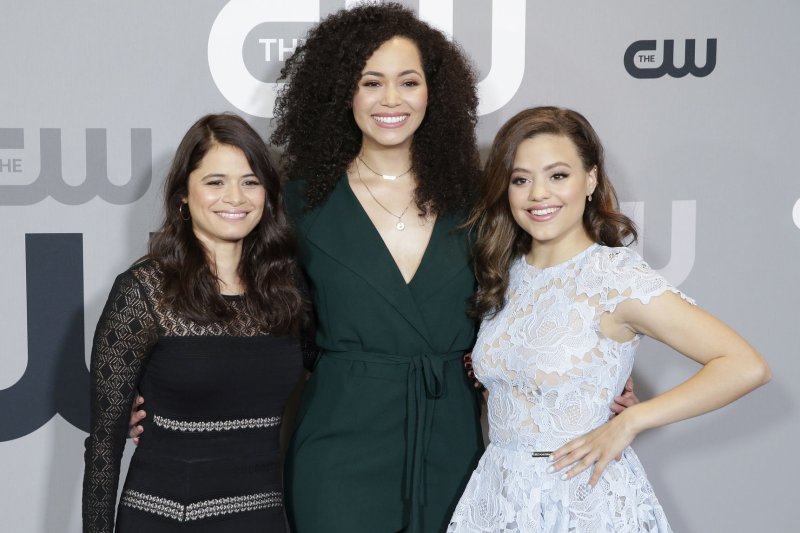 Left to right, Melonie Diaz, Madeleine Mantock and Sarah Jeffery of "Charmed" arrive at The CW Network's 2018 upfront on May 17 in New York City. The show is to debut Sunday. File Photo by John Angelillo/UPI | License Photo

Oct. 12 (UPI) -- Melonie Diaz said she and her co-stars, who are also people of color, are pleased to play lead instead of supporting characters on a major television show like Charmed.

Co-starring Madeleine Mantock and Sarah Jeffery, the reboot of the beloved supernatural series also follows three sisters who discover as adults that they are powerful witches.

"It's been great. Maddie and Sarah and I, we always joke, 'I can't believe I'm not the best friend.' It's common. They want to put the brown person as the best friend all the time. And we're like: 'Really? This is 2018. Why am I supporting somebody else?'" Diaz told reporters during a recent roundtable interview at New York Comic Con.

"So, the fact that they gave me this opportunity, I feel very lucky," she added.

Her character Mel is a gay political activist, as well as a sorceress.

"In terms of her of being a lesbian, the way we're talking about it is she just is. We never mention it. She's just a woman who loves another woman and that's it. It's the way it should be," she said.

Since Republican Donald Trump was elected President of the United States in 2016, Diaz said she has been eager to play a social-justice warrior on screen.

"I'm still so upset. I cannot believe this is reality and Mel is so angry about it," she said. "She wants justice and to make the world a better place. ... It's fun to play a character who is not apologetic about being angry."

Jeffery, who plays bubbly baby sister Maggie, said she was attracted to the series because of the supernatural side of it.

"Getting to play in this fantasy world is so exciting," she said. "I've always been so attracted to magic. I wanted to be a witch so badly when I was younger. Loved Harry Potter. Still do."

The Charmed fans in Jeffery's life are also thrilled about her new job.

"My cousin is virtually obsessed with Charmed. She could not believe it," Jeffery said. "It's so near and dear to so many people."

Mantock said she liked the idea of introducing the show to an enthusiastic crowd during a screening and panel discussion at Comic Con.

"It's really lovely to see a wide span of people who are happy to see us and really kind of curious and hopeful. It's really nice that they are hopeful about what we are doing. I hope people like it. We are working really hard and I really want it to be good," she said.

The updated version is set to debut on The CW Sunday night.

The announcement in January that a remake was in the works received mixed reactions from the original cast members.

"I hope they respect the original and listen to you all and make a show that's inspired by charmed that focuses on what's important in life," Doherty told fans, adding: "I'm intrigued by the idea that a new generation might be comforted, inspired like all you were. Charmed helped us all in some way."

Combs also weighed in on the reboot news.

"Here's the thing. Until you ask us to rewrite it like (showrunner) Brad Kern did weekly don't even think of capitalizing on our hard work. Charmed belongs to the 4 of us, our vast amount of writers, crews and predominantly the fans. FYI you will not fool them by owning a title/stamp. So bye," Combs wrote.

She later tweeted, "And we wish them well."

TV // 15 hours ago
Milo Ventimiglia: 'This Is Us' speaks to everyone
NEW YORK, May 11 (UPI) -- "This Is Us" star Milo Ventimiglia said even he is surprised at how rich and complicated a character Jack Pearson has turned out to be.

TV // 16 hours ago
Barry Jenkins: Therapist on 'Underground Railroad' set 'allowed people to be free'
LOS ANGELES, May 14 (UPI) -- Executive producer Barry Jenkins said he hired a therapist to be on set throughout the production of "The Underground Railroad" as the intense subject of the series caused emotional trauma.