The couple were first linked in December following Kim's robbery in October 2016.

Kourtney Kardashian (R), pictured with Kim Kardashian, recounted on Sunday's episode of "Keeping Up with the Kardashians" how she met boyfriend Younes Bendjima prior to Kim's robbery. File Photo by Jim Ruymen/UPI | License Photo

The 38-year-old reality star recounted on Sunday's episode of Keeping Up with the Kardashians how she met Bendjima in Paris just prior to Kim being robbed at gunpoint.

"We, like, walked into a bar and [Kim's assistant] Stephanie [Shepherd] was across from me and she kept going, 'This guy's cute over here,'" Kourtney told sister Khloe Kardashian.

"He was friends with our friends," she explained. "He would walk in, say hi, shake hands with like, our security or whatever, but like, not say hi to us. And then I was like, 'Why do you hate us?' I was just drunk."

"Once I said that he literally grabbed my hand and was like, 'It's five in the morning. We're leaving.' And then next night Younes was like, 'Bring your [expletive] here,'" the star recalled. "We walked into that club ... and got the phone call about Kim."

Kourtney said Younes refused to leave her as she dealt with the aftermath of Kim's robbery, and that he served as a translator as they spoke to French police.

"He was like, 'I'm not leaving you guys,' and he like, had to translate everything," she shared.

Kourtney and Younes were first linked in December following Kim's robbery in October 2016. People reported in October that the couple are heating up.

"Kourtney is getting more serious with Younes," a source said. "He makes her very happy. He is spending more time with her family and everyone likes him."

Kourtney shares three children with ex-partner Scott Disick, from whom she split in July 2015 after nine years of dating. Disick confessed on Sunday's episode that he's "not happy" dating since his breakup with Kourtney. 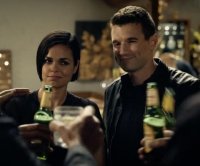 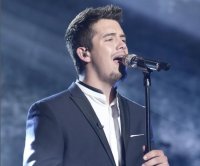 TV // 14 hours ago
TV review: 'Stranger Things' Season 4 impresses with teenage drama
LOS ANGELES, May 23 (UPI) -- "Stranger Things" Season 4 shows dramatic progressions in the storylines and performances, but it's still just as scary and exciting as before.