Oct. 24 (UPI) -- Roseanne Barr shared on Instagram Monday a photo of herself smiling next to Laurie Metcalf on the set of the upcoming Roseanne revival.

"On the lot with #lauriemetcalf #roseanne #roseanneandjackie #abc #havingablast," Barr captioned the image which features the Roseanne star using a scooter as Metcalf is seen holding up a script.

John Goodman, Sara Gilbert, Lecy Goranson, Michael Fishman and Sarah Chalke are expected to return to Roseanne in addition to Barr and Metcalf.

Roseanne, which orginally aired from 1988 to 1997, will be returning on ABC starting in 2018 with its first new episode titled "Twenty Years to Life," Entertainment Weekly reported.

TV // 18 hours ago
History channel, 'Toys That Made Us' team tackle 'Star Trek'
Oct. 25 (UPI) -- History channel announced "The Center Seat: 55 Years of Star Trek" on Monday. The docuseries from "Next Generation" star Gates McFadden and "The Toys That Made Us" creator Brian Volk-Weiss premieres Nov. 5. 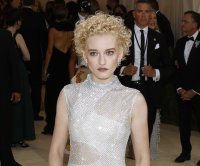