Actor Anthony Hopkins arrives on the red carpet at the "Transformers The Last Knight" movie premiere on June 20 in Chicago. Hopkins is to star in a modern telling of "King Lear" for the BBC. File Photo by John Gress/UPI | License Photo

Emma Thompson arrives at a photocall for the film "The Meyerowitz Stories (New and Selected)" during the 70th annual Cannes International Film Festival on May 21. File Photo by David Silpa/UPI | License Photo

Richard Eyre is to direct the film, which will air on the BBC in the United Kingdom and via Amazon Prime Video in the United States and Germany next year.

Hopkins will play the titular monarch and Thompson will play his oldest daughter Goneril. This marks the third time the pair will work together, following the period movies The Remains of the Day and Howards End.

"It is a tribute to the great Richard Eyre that we have brought together such a remarkable cast. The film is a testament to the BBC's on-going commitment to the single drama, and we are very appreciative of their continued support," executive producers Colin Callender and Sonia Friedman said in a joint statement Thursday.

TV // 7 hours ago
Billy Crudup: 'Morning Show' S2 continues to contribute to cultural discussion
NEW YORK, Sept. 17 (UPI) -- Billy Crudup says the writers and producers of his Me Too- and Time's Up-themed dramedy, "The Morning Show," found a new way to stay relevant by realistically depicting the mayhem of 2020. 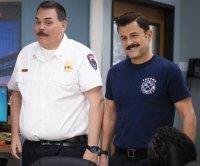