Jennifer Lopez (R) and Alex Rodriguez attend the Costume Institute Benefit at the Metropolitan Museum of Art on May 1. The couple invited Jenna Dewan, Channing Tatum and other friends to watch "World of Dance" premiere Tuesday. File Photo by John Angelillo/UPI | License Photo

"#WOD premiere. Such a great night. #proud @jlo," Rodriguez captioned a video on Instagram of the gathering.

Dewan posted a clip on her own account of herself and Lopez dancing.

"Worldwide trend what?! Waiting for #WorldofDance to start on the West Coast like..." she wrote.

World of Dance features solo and group performers as they compete for a grand prize of $1 million. Lopez, who started her career as a dancer, also executive produces the series.

"[The show is] the best thing I could have ever done," the star said at a press event in March. "It's like a dream come true and, like, the perfect job for me."

"I love dance at such at core level and I always consider myself a dancer first because I became a singer and an actress after. That was my first form of artistic expression. It's so part of who I am," she added.

Lopez and Rodriguez were first linked in March, and confirmed their relationship the same month. The singer couldn't help but gush about the retired New York Yankees player on the May 4 episode of The Late Late Show with James Corden.

‪Worldwide trend what?! Waiting for #WorldofDance to start on the West Coast like...‬ 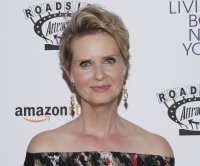 TV // 6 hours ago
Jared Leto on his approach to acting: 'I like transformation'
Jan. 28 (UPI) -- Jared Leto discussed how he approaches acting while appearing on "The Late Late Show with James Corden."

TV // 10 hours ago
'Afterparty' cast: High school reunion provides myriad motives for murder
NEW YORK, Jan. 28 (UPI) -- The stars of "The Afterparty" say a high school reunion is the perfect backdrop for a murder mystery because they can be fraught with rivalries, old grudges and unrealistic expectations.