Nicole Kidman says she was once engaged to Lenny Kravitz

The actress dated Kravitz in 2003 following her divorce from husband Tom Cruise.

Zoe Kravitz at the New York premiere of "Fantastic Beasts and Where to Find Them" in November. File Photo by Dennis Van Tine/UPI | License Photo

Feb. 16 (UPI) -- Nicole Kidman says she was once engaged to singer Lenny Kravitz.

The 49-year-old Australian actress confirmed she was engaged to the 52-year-old American musician in the Feb. 16 issue of The Edit while discussing her work with Kravitz's daughter, Zoe Kravitz, on the HBO series Big Little Lies.

"Well, I knew Zoe because I was engaged to her father. It's all in the family! I love Lenny; he's a great guy," she told the magazine.

"[Nicole] can be quiet and shy, which is interesting because the beast of an actress that she is, is so loud and clear," Zoe Kravitz said. "She's so good that sometimes it was distracting. After every take I wanted to just stop and say, 'Wow.'"

Kidman dated Lenny Kravitz in 2003 following her divorce from Tom Cruise. She previously discussed the engagement in the October 2007 issue of Vanity Fair, although she didn't confirm the singer by name.

"I got engaged to somebody ... but it just wasn't right. I wasn't ready. We weren't ready," she told the publication.

"I get engaged and I get married -- that's my thing," the star said. "I don't want to date. I'm interested in a very, very deep connection."

Kidman went on to wed Keith Urban in 2006, and shares daughters Sunday and Faith with the country star. She recalled on CBS Sunday Morning in December how Urban helped her cope with her father's death in 2014.

"I was shattered beyond belief," she said. "He flew six hours and he was right back there [with me]. And he literally picked me up and pretty much carried me through the next two weeks."

Big Little Lies co-stars Reese Witherspoon, Laura Dern and Shailene Woodley. The series is based on the novel of the same name by Liane Moriarty, and will premiere Sunday at 9 p.m. ET on HBO. 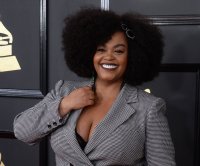