The reality star and wife Ann Lueders are also parents to a 5-year-old son and 2-year-old daughter.

"Well Carter James Csincsak is finally here!!!" he tweeted before adding, "Pretty excited to get to share #carterjamescsincsak with the world today!!" on Instagram.

"My father-in-law Brian Carter Lueders was a huge part of our lives. Not only was he a grandfather [and] father, but he was a part of our daily routines," Csincsak said. "He was always there when we needed help for something."

"He always had a smile on his face, and I never once heard him complain! If Carter has just half the amazing traits my father-in-law did, he will turn out to be an amazing man. He was one of the greatest men I have ever had the chance to know personally, and he is dearly missed," he added.

Csincsak also revealed that Noah and Charlotte are thrilled to have a new sibling. He described his elder kids' interactions with the baby as "heartwarming," saying Noah will be "a great big brother."

"Our oldest, Noah, is such the protector of Carter already," the star said. "And Charlotte is like a second mother."

Csincsak and Lueders married in 2010 after meeting at a Bachelor reunion party. Csincsak was previously engaged to Bachelorette Season 4 star DeAnna Pappas.

TV // 1 day ago
Jared Leto on his approach to acting: 'I like transformation'
Jan. 28 (UPI) -- Jared Leto discussed how he approaches acting while appearing on "The Late Late Show with James Corden." 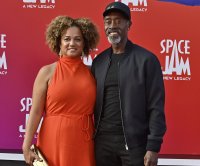 TV // 1 day ago
'Afterparty' cast: High school reunion provides myriad motives for murder
NEW YORK, Jan. 28 (UPI) -- The stars of "The Afterparty" say a high school reunion is the perfect backdrop for a murder mystery because they can be fraught with rivalries, old grudges and unrealistic expectations.