"For women, you're so judged and everyone's saying, 'Oh, she's still married,'" the star said.

Khloe Kardashian (L) and Lamar Odom at the Los Angeles premiere of "Whiteout" on September 9, 2009. The reality star responded to backlash over her personal life Wednesday. File Photo by Jim Ruymen/UPI | License Photo

The 31-year-old reality star responded to backlash over her personal life on the premiere episode of Kocktails with Khloe. Kardashian faced criticism for dating French Montana and present boyfriend James Harden after filing for divorce from husband Lamar Odom.

"During my separation, I'm like, 'Okay, I've been waiting for this divorce to go through so now I'm going to date someone' but ... for women, you're so judged and everyone's saying, 'Oh, she's still married,'" the star said. "Why can men do this -- or during someone's marriage if they cheat or whatever -- [and] no one throws stones at them? Why am I cast as some Jezebel?"

Kardashian filed to end her marriage to Odom in 2013, and went on to date French Montana the next year. The couple split amid reports the 36-year-old former NBA player was unfaithful, which Kardashian confirmed during a candid discussion of their relationship last week.

"Lamar was so great at making me feel like I was the only one and I'm this princess, I never speculated cheating," she told Howard Stern. "He was so good. Nothing was on his cell phone. He had an assistant and [the women were] all on his assistant's phone. He was really crafty. It's disgusting."

Kardashian and Harden have been linked since July, months prior to Odom's health scare. The reality star called off her divorce following her estranged husband's hospitalization, but later told Ellen DeGeneres she and Odom aren't romantically involved.

"I have a great boyfriend who's understanding," she said of Harden. "You know, it's definitely a very unique situation, to say the least. [James is] fine with it. I mean, we have to communicate a lot. And he's really supportive and great."

Kardashian shared a cryptic post this week instructing her followers to "stay away from people who make you feel like you are hard to love" and to "never compromise the way you desire to be loved." Kocktails with Khloe airs Wednesdays at 10 p.m. ET on the FYI channel. 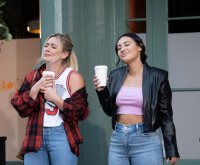 TV // 21 hours ago
'The Cuphead Show!' trailer teases fun, adventure in Netflix series
Jan. 18 (UPI) -- "The Cuphead Show!," a new animated series based on the video game "Cuphead," is coming to Netflix in February.