The series will reportedly receive a limited revival on Netflix.

BURBANK, Calif., Jan. 6 (UPI) -- A Gilmore Girls revival may indeed be in the works at Warner Bros. and Netflix.

Fans of the original WB/CW series had their hopes renewed when Twitter user @caddyglass shared photos of activity on the Stars Hollow set last week.

The social media user posted a picture of a "fresh coat of paint on Miss Patty's dance studio" from the Warner Bros. lot, as well as what appears to be props for Kim's Antiques and Weston Bakery.

Graham, who played Lorelai Gilmore, subsequently tweeted, "DUDES. I can't confirm this. But I also can't deny this..." in October, while Liza Weil, who portrayed Paris Geller, later told The Huffington Post she "very much hopes to be a part of [the revival]."

Gilmore Girls ran for six seasons on The WB, and finished with one season on The CW in 2007. The series followed single mom Lorelai (Graham) and her daughter Rory (Bledel) as they lived and worked in the fictional small town Stars Hollow, Conn.

TV // 20 hours ago
Jared Leto on his approach to acting: 'I like transformation'
Jan. 28 (UPI) -- Jared Leto discussed how he approaches acting while appearing on "The Late Late Show with James Corden."

TV // 1 day ago
'Afterparty' cast: High school reunion provides myriad motives for murder
NEW YORK, Jan. 28 (UPI) -- The stars of "The Afterparty" say a high school reunion is the perfect backdrop for a murder mystery because they can be fraught with rivalries, old grudges and unrealistic expectations. 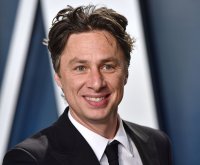