Director likens the sharknado to Freddy, Jason and Frankenstein

"The sharknado is our villain and it does what we tell it to do. So, if it chews through a car hood, a shark can’t do that, but a sharknado can," says director Anthony Ferrante.

NEW YORK, July 25 (UPI) -- Director Anthony Ferrante says the key to enjoying his TV movie Sharknado and its sequel Sharknado 2: The Second One is to suspend one's sense of disbelief and just go along for the ride.

"People get hung up on the fact that sharks can't exist in a tornado and tornadoes can't do what they do, and all that stuff," Ferrante said in a teleconference with reporters this week.

"The simple explanation on our end is: it's a sharknado. It's like our Frankenstein, our Freddy Krueger, our Jason. You don't question Jason getting his neck chopped off half a million times and getting shot and getting back up again. It's part of the mythology.

So, I think the thing we've accepted is the sharknado is our villain and it does what we tell it to do. So, if it chews through a car hood, a shark can't do that, but a sharknado can. It opens up the imagination of what you can do and we were able to do a lot of crazy stuff because we were freed by the fact that we could do anything."

The first film was about how bar-owner Fin, played by Ian Ziering, and his ex-wife April, played by Tara Reid, survive a freak weather occurrence that deposits man-eating sharks on Los Angeles. The sequel finds the reunited couple in the midst of a similar disaster -- this time in New York City.

So, what makes the Sharknado franchise a pop-culture phenomenon?

"You can't really pick it apart and say it was this or that," Ferrante said.

"We were this fun, little film that people didn't have to pay $50 at a movie theater to take their family to. They got to watch it in the privacy of their own homes and they had a blast. They made fun of it. They loved it. They hated it. It was great."

Asked by UPI if he felt more pressure going into the second film because he now has audience and media expectations to meet, Ferrante replied, "I think there is pressure just as a filmmaker."

"I'm hard on myself. I beat myself up every day trying to pull this stuff off. You can't go into the second one and just be OK. You have to be better than OK. You have to be good, great, whatever you can do to make a better experience.

I think the benefit of what we did on this one is that we didn't have, like, three years in between making the movies. We literally blew up in July [2013] and were talking about a sequel in August and the script was being developed and we were shooting in February. So, it felt like we were still making the first movie."

"We had a lot of discussions about the Sharknado moment," he continued, "and I kept saying I don't think we will ever be able to achieve what we did in the first movie with Fin going into the shark [and cutting his way out with a chainsaw]."

"That was lightning in a bottle, but we can provide a whole bunch of other really cool moments. So, if we could come up with 10 or 12 great moments, maybe one of them will stand out and we'll be lucky and someone will go, 'It's the new Sharknado moment.' Or maybe there is enough stuff in this, they won't even question it. They'll just have fun. It's a tricky balance, but I think we had more confidence going into this and we could take chances and risks."

Sharknado 2: The Second One is scheduled to premiere on Syfy July 30.

TV // 2 hours ago
Thomas Jane: Traumatized 'Troppo' sleuths need a win in Season 1
NEW YORK, May 19 (UPI) -- Thomas Jane and Nicole Chamoun say the private eyes they play in the new Australian drama, "Troppo," are outsiders with something to prove.

TV // 7 hours ago
'The Hills' reboot returning to MTV with new cast
May 18 (UPI) -- MTV is set to bring back one of its most popular reality series, "The Hills." The Paramount network is giving the green light to a planned reboot of the hit franchise. 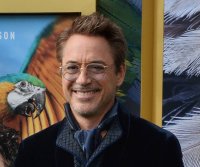 TV // 17 hours ago
Discovery+, Travel set paranormal lineup with Kesha, Jack Osbourne shows
May 18 (UPI) -- Discovery+ and the Travel Channel have announced a new slate of paranormal-themed programming launching in 2022.

TV // 19 hours ago
Sacha Baron Cohen to narrate 'Chelm' animated comedy special
May 18 (UPI) -- "Chelm: The Smartest Place on Earth," a new special from Sacha Baron Cohen and "King of the Hill" creators Greg Daniels and Mike Judge, is coming to HBO Max.