"I really think that is the point of life, to just be happy, to just be in the moment," Richie says. "You have to have a sense of humor about life."

Nicole Richie arrives on the red carpet at the Costume Institute Benefit celebrating the opening of Charles James: Beyond Fashion and the new Anna Wintour Costume Center at the Metropolitan Museum of Art in New York City on May 5, 2014. UPI/John Angelillo | License Photo

The 32-year-old reality star and entrepreneur appeared on the morning program with freshly-dyed locks in a cobalt hue. Richie is no stranger to colorful tresses, having previously dyed her hair purple in March.

Richie discussed her new series, Candidly Nicole, during the interview. The program is based on her Twitter and web series of the same name, and will debut on VH1 later this month. The show follows Richie as she works at her fashion label House of Harlow 1960, and continues to pursue acting, authorship and philanthropy.

"The show is based off of my Twitter, and really, how I use Twitter is I use it to laugh," the designer shares. "To make fun of myself and explore things I don't real know anything about."

"It's not reality, it's not scripted, it's kind of a place in-between that I like to call 'real life comedy,'" she continues. "I love to explore, I love to learn, and more importantly, I like to have fun. [The show is] a space where I can do all three, and it's just so much fun."

Richie says fans will take away information from the show in addition to it being fun, and teases that online dating, women respecting women and raising chickens are some of the topics she explores. Candidly Nicole premieres July 17 on VH1.

TV // 1 hour ago
'MacGruber': Will Forte, Kristen Wiig reunite in new trailer
Dec. 6 (UPI) -- Will Forte is on a new mission and is reunited with Kristen Wiig in the latest trailer for Peacock's MacGruber. 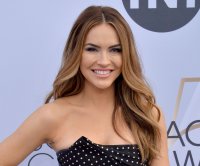