Hasselbeck, 37, was one of the hosts of the ABC daytime talk show for 10 years until she left in 2013 for her job with Fox News.

"I was shocked, in some ways," Hasselbeck said, adding that she's sure Shepherd is also shocked. "Even if you think that might happen one day, I'm sure it would come across to be a shock."

"I have not spoken to her in person yet," she added. "Set to happen, though."

Shepherd reportedly left the show because she and ABC couldn't come to terms on her new contract.

After Shepherd made her announcement, The View co-host McCarthy said she's leaving, too.

My View will be changing too. As will with many hard working folks. Thanks to everyone at the show for your dedication and an amazing year.

TV // 17 hours ago
Vanessa Morgan returns to 'Riverdale' set with baby boy in tow
April 16 (UPI) -- Vanessa Morgan, who plays Toni Topaz on "Riverdale," brought her infant son, River, with her to the set of the CW series.

TV // 20 hours ago
Jeffrey Dean Morgan shares photo of son as 'Walking Dead' extra
April 16 (UPI) -- Jeffrey Dean Morgan, who plays villain Negan on "The Walking Dead," shared on Instagram a black-and-white photo of his 11-year-old son Augustus wearing zombie makeup for his stint as an extra on the action-drama.

TV // 20 hours ago
Ice-T on band Body Count winning a Grammy: 'My mind was totally blown'
April 16 (UPI) -- Ice-T discussed how shocked he was when his band, Body Count, won a Grammy Award while appearing on "The Tonight Show Starring Jimmy Fallon." 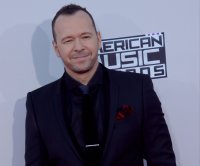