Sailor Moon must defend justice and protect the Illusionary Silver Crystal from evil.

The franchise reboot premieres next month, and is highly anticipated among fans of the series. Sailor Moon (Rinko Iori) introduces herself in the preview, and Sailors Mercury (Hisako Kanemoto), Mars (Rina Satou), Jupiter (Ami Koshimizu) and Venus (Shizuka Itou) are also shown.

Sailor Moon began as a manga in 1992, and has been adapted into several television series previously. The new program will revisit the story, which follows Usagi Tsukino as she transforms from a middle school girl into the title character.

Pretty Guardian Sailor Moon Crystal debuts July 5, and will air on the first and third Saturdays of the month. U.S. fans can stream the series on website Crunchyroll, and 200 original episodes are currently available on Hulu.

TV // 20 hours ago
Discovery+, Travel set paranormal lineup with Kesha, Jack Osbourne shows
May 18 (UPI) -- Discovery+ and the Travel Channel have announced a new slate of paranormal-themed programming launching in 2022.

TV // 21 hours ago
Sacha Baron Cohen to narrate 'Chelm' animated comedy special
May 18 (UPI) -- "Chelm: The Smartest Place on Earth," a new special from Sacha Baron Cohen and "King of the Hill" creators Greg Daniels and Mike Judge, is coming to HBO Max. 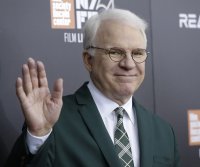