BURBANK, Calif., Nov. 20 (UPI) -- Diane Disney Miller died at her home in California's Napa Valley from complications of a September fall, the Los Angeles Times reported. She was 79.

"We are deeply saddened by the loss of Diane Disney Miller and our thoughts are with her family during this difficult time," Robert A. Iger, president and chief executive officer of The Walt Disney Co., said in a statement Tuesday. "As the beloved daughter of Walt Disney and one of his inspirations for creating Disneyland, she holds a special place in the history of The Walt Disney Co. and in the hearts of fans everywhere. She will be remembered for her grace and generosity and tireless work to preserve her father's legacy, and she will be greatly missed by all who knew her. In her memory and honor, flags at the Disney Studio Lot in Burbank and at our theme parks will be flown at half-mast."

The Times said Miller is survived by her husband, Ron, as well as by their sons Christopher, Walter, Ronald and Patrick; daughters Joanna and Tamara Miller and Jennifer Miller-Goff; 13 grandchildren and one great-granddaughter.

Her sister, Sharon Disney Lund, died in 1993, the newspaper said.

TV // 1 hour ago
'For All Mankind' goes to Mars in Season 3 trailer
May 16 (UPI) -- Apple TV+ released the trailer for Season 3 of "For All Mankind" on Monday. The show returns June 10 with astronauts approaching Mars and a new investor (Edi Gathegi) funding a private space mission.

TV // 4 hours ago
Penelope and Colin will be focus of 'Bridgerton' Season 3
May 16 (UPI) -- "Bridgerton" actress Nicola Coughlan has announced which characters will be the focus of the Netflix costume drama's third season. 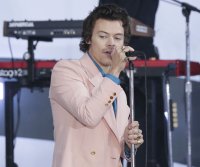 TV // 6 hours ago
Harry Styles to read CBeebies bedtime story in his pajamas
May 16 (UPI) -- Singer and actor Harry Styles will be seen reading a CBeebies Bedtime Story on May 23, the BBC announced Monday.

TV // 6 hours ago
'COVID free' Stephen Colbert returning to 'Late Show' Monday
May 16 (UPI) -- Comedian Stephen Colbert will be back in his New York TV studio Monday to host "The Late Show." 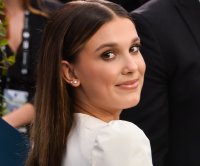