The musician said she didn't feel intimidated by the fellow judges -- including L.A. Reid, who she said is "hilarious and smart" -- even though she's the youngest at 20.

"It's an honor to sit next to them because they're legends, but I'm a southern girl with a big mouth, and I speak my mind!" Lovato told Parade magazine.

The season finale of the Fox reality singing competition is scheduled to air Thursday. Lovato said it was fun, but stressful, mentoring the young adults competitors this season.

"I was surprised at how emotionally invested I became. It hurts to see them go, especially when I know their potential," she said.

Meanwhile, Lovato told Parade she's working on her fourth album, which will be released next year.

"I'll be singing about some stuff that I haven't talked about before. I just want to inspire people," she said.

TV // 21 hours ago
Kumail Nanjiani says dad can't bring up his 'Eternals' role without crying
Oct. 15 (UPI) -- Kumail Nanjiani and Salma Hayek discussed their roles in Marvel's "Eternals" and how their parents reacted to their casting on "Jimmy Kimmel Live." 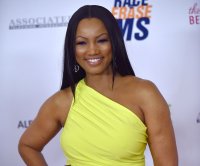