Trey Parker (L) and Matt Stone, producers of "The Book of Mormon," pose with all the Tony Awards their play received along with the honor of Best Musical during the 65th Annual Tony Awards at the Beacon Theatre on June 12, 2011 in New York City. UPI/Monika Graff. | License Photo

FAIRFAX, Va., June 23 (UPI) -- A New York man was sentenced to 138 months in prison for threats against "South Park" creators Matt Stone and Trey Parker over an episode featuring Mohammed.

Jesse Curtis Morton, who went by the name Younus Abdullah Muhammed, was convicted of being a co-conspirator in Zachary Chesser's death threats against the two television creators, The Hollywood Reporter reported Friday.

The two were offended by an episode of "South Park" featuring the prophet Mohammed dressed as a bear.

The FBI said Morton helped Chesser on Web site postings by urging followers to pay Stone and Parker a visit and posting details of where they live.

"I justified atrocities by Muslims simply because they were carried out by the weak against the powerful," Morton said in a Virginia court before sentencing Friday.

A judge sentenced Chesser to 25 years in prison for his plot to kill the television duo, THR reported.

TV // 35 minutes ago
Nathanya Alexander: 'Genera+ion' episodes reveal Arianna's vulnerable side
LOS ANGELES, June 24 (UPI) -- "Genera+ion" star Nathanya Alexander describes the upcoming struggles for her teenage character, and the homework she did to elaborate on her role. 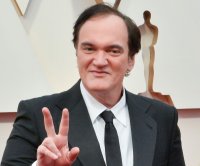 TV // 18 hours ago
Quentin Tarantino on naming son Leo: 'He was our little lion'
June 23 (UPI) -- Quentin Tarantino discussed why he named is infant son Leo and the history of film novelizations while appearing on Jimmy Kimmel Live.