The Salt Lake Tribune said Cherry was inspired to create his show about unhappy, upper-middle-class suburbanites after he and his mother Martha saw a news story on TV about a woman who drowned her children.

"I turned to her and said, 'Gosh, can you imagine a woman being so desperate that she would hurt her own children?'" the Tribune reported Cherry said shortly before "Desperate Housewives" made its debut. "And my mother took her cigarette out of her mouth and turned to me and said, 'I've been there.'"

Cherry told the newspaper aspects of several of the characters are based on his mother, particularly the passive-aggressive perfectionist Bree, played by Marcia Cross. He also said he has been happy to work out his own personal issues through the show.

"I adore my mom," he said. "Without my mother, there would be no 'Desperate Housewives.'" 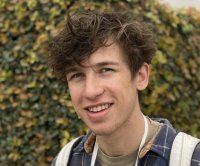 TV // 19 hours ago
Terry Crews on new marriage audiobook: 'You are stronger together'
April 15 (UPI) -- Terry Crews discussed his new audiobook on marriage titled "Stronger Together" that he created with his wife Rebecca King Crews while appearing on "Jimmy Kimmel Live."