Howell, Hudson to appear on 'Torchwood'

Ernie Hudson arrives for the premier of the movie "Year One" at the Lincoln Square theater on June15, 2009 in New York City. (UPI Photo/Monika Graff) | License Photo

Other guest stars lined up to appear on the science-fiction drama are Nana Visitor, John DeLancie, Mare Winningham and Frances Fisher.

Produced by BBC Worldwide Productions, BBC Cymru Wales and BBC Worldwide, the 10-episode "Torchwood: Miracle Day" is to premiere on the U.S. cable network July 8. It is about what happens when people stop dying around the world.

Set in Cardiff, Wales, "Torchwood" ran for two seasons, then was followed by the miniseries "Torchwood: Children of Earth." The previous incarnations aired on the BBC and BBC America.

"Miracle Day" will be the first installment to take place in the United States and debut on Starz. 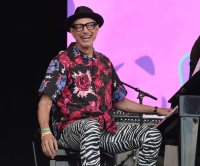